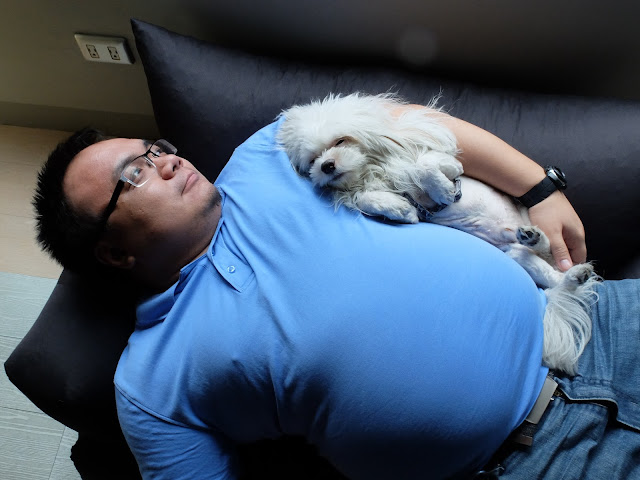 So Yoshi and I kind of had a moment on the bean bag couch at work. He had been a little mopey all afternoon waiting for me to finish with work so I took a break give him some cuddling and soon he seemed pretty content with not moving anymore. Photos ensued.

We have very long days during the work week. We wake up around 06:00am in order to get to work on time since Tobie starts his day at 09:00am and mine starts at 10:00am. On most days Tobie tries to take us to the office first before going to Makat but on other days I take an Uber from his office back to BGC. On really bad days I take an Uber all the way from the Sietch, assuming there's one to be found during the morning rush.

At night Tobie tends to swing by the office after 05:00pm to wait for me to finish up, which is closer to 08:00pm. On some nights we rush right into the horrors of EDSA and hope to get home sooner rather than later. On other nights we end up having dinner in BGC whether at some restaurant in the area or just ordering take-out and eating at the office. Sometimes it's easier to just wait out the worst of the traffic and leaving later rather than spending more time on the road. It's a broken system, but we make the most of it.

We get maybe an hour at home before we end up going to bed and starting the cycle all over again. And thus weekends are never long enough really to recover from all this. But it's the nature of living in Metro Manila and we're both still happy with our careers. But yeah, moving closer to our respect jobs more and more seems like a good idea. Or at the very least, I probably need to learn to drive so Tobie doesn't have to do all the heavy lifting.
sietch life Tobie work