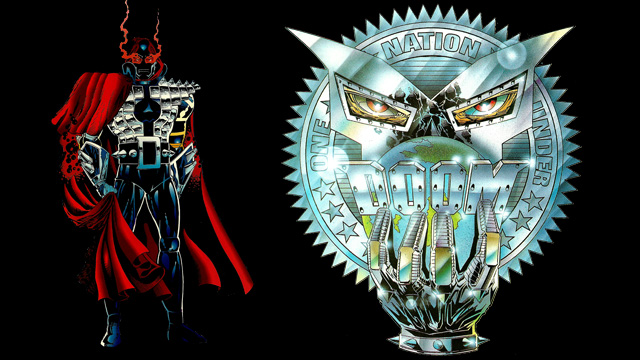 So as of the moment, our official presidential candidates are Binay and Roxas. Everyone is pretty much certain that Senator Grace Poe is going to run as well, but of course she's playing the traditional politics game by being all coy about things. There's a lot of back and forth about candidates like Marcos, Duterte and Santiago possibly running, but so far they're not making any final announcements but are certainly doing their best to stay in the media spotlight.

When you look at a lot of social media sentiment, there's a lot of support for a strong hand governing the country since we repeatedly love to state how stupid the majority of the country is or how we can't be trusted to rule ourselves. Thus in honor of this post having a hex number of 02099, let's celebrate the rule of a great dictator, the future version of Doctor Doom from the past who once ruled America in the 2099 comics.

Doom 2099 was truly a god among men, only because the world of 2099 seemed to have very few heroes compared to the "modern" era. And so he only had to defeat the mega corporations before taking the reins of power and then it was pretty much all set and done. Of course eventual complications to his rule and the supposed return of certain heroes eventually knocked him out of power, but you can't beat a good megalomaniac.

Is he the sort of leader that this country needs? Maybe, maybe not. It's easy to admire how seemingly effective a "benevolent dictator" can be until you realize all the rights he ends up oppressing in the name of peace, order and simply efficiency. A country's freedoms are eventually chipped away in the name of progress and all that jazz. Long story short, it's fun to read about and it's easy to laud the end results when it's someone else's country. But if you like your freedoms too much, then maybe this sort of leader isn't for you.

So you might as well try voting for Doom 2099 in 2016. He has just about as much chances of winning as the next guy who actually has a plan for the country and a vision for the future. In truth, you know the election is going to go to whichever candidate gets the best screen time and makes the most alluring campaign promises even though they never discuss how they intend to accomplish any of these goals. Then we dance for another 6 years as those who most ardently supported the winner will quickly become critics of the ruling administration.

It goes on and on and on.
comics inner ramblings stop the presses