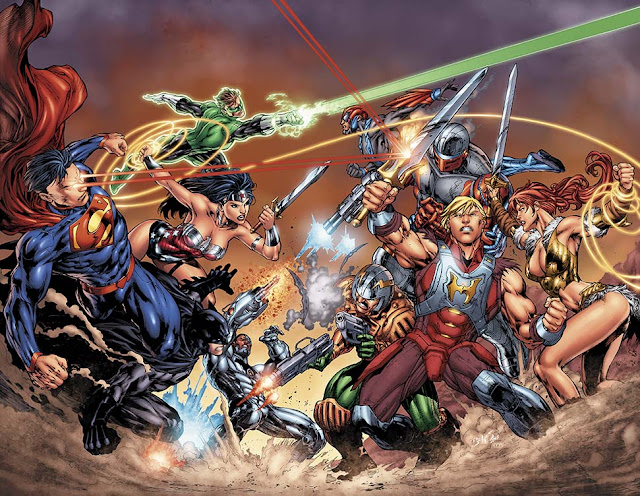 So we're in the middle of our DC Heroes game where most of our band of heroes have been transported to a fairy world in line with some millennial tournament of the world of magic versus the world of steel / science. My character is a poorly educated Hispanic youth entrusted with the role of being the First Knight of some Lady of the Lake style figure. And since I'm in the role of Earth's champion for science, it's a lot to handle. And my lack of sophistication when it comes to speech is definitely going to be a factor in how we negotiate - or fight- our way out of things.

Our DC Heroes game is definitely a nice break from the seriousness of everything else in the world. And while we still have serious moments in this game and we also enjoy serious RPG adventures from time to time, sometimes you just want to escape things entirely. And the superhero genre certainly has its benefits in terms of getting away from the mundane nature of every day life.

Last night we had another session of our long-running Orpheus game. That game is pretty grim given the nature of most White Wolf games. One of our player characters actually died during the session, which is sad. But given the nature of the game being about people who can project as spectral, ghostly figures, that just means he's now going to transition to portraying a full ghost. And he's not the first ghost on the team.

A lot of times I feel like I should write about our gaming more. I'm not 100% sure what I want to say, but it's a subject that takes up a lot of our life - or at least our free time. So that deserves something, right? But we'll see.
blogging gaming sietch life tabletop gaming