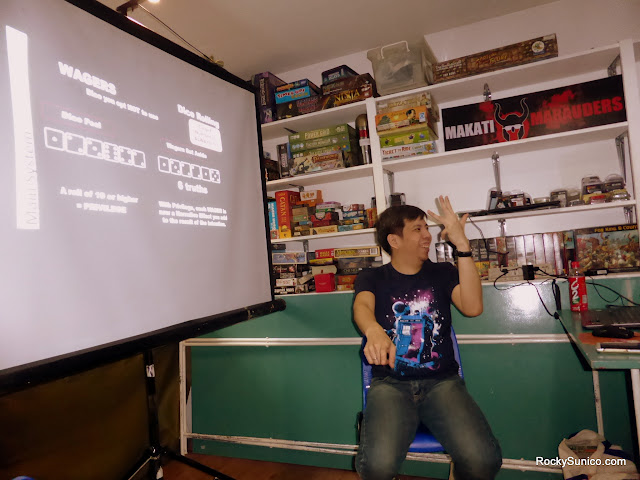 So Tobie is already asleep after what has been a very gaming-centric weekend for us. Between the pre-birthday gaming night for a friend to the first expanded Gaming Seminar complete with open gaming tables, we had a lot on our plates this week. But I'm pretty sure we all came out better for it and still managed to have a lot of fun along the way.

I'm really proud of Tobie - he gave a rather lengthy and in-depth talk on five different indie game systems to help expose the players to the other options out there. In a hobby that will always first bring Dungeons & Dragons to mind, there are actually a highly significant number f alternative systems out there to explore and people are really missing out by limiting themselves to a single game. His talk today was part of an effort to show everyone what else is out there beyond the more famous games and show what makes each system so compelling.

I count myself fortunate that Tobie has been my navigator in these explorations of the gaming worlds. He's obviously very passionate about the medium and that enthusiasm can be pretty contagious over time. He's also a pretty skilled teacher and has quite the knack of digesting new systems and finding ways to share what he knows with other players in order to get them on-board in a manner that is as painless as possible. Once you've gamed with Tobie, there's a good chance you'll find yourself wanting to play again and again. And all the more reason I'm so proud of how skilled he has become in this particular hobby.

I also picked up a copy of the crazy card game Epic Spell Wars of the Battle Wizards at Mt. Skulzfyre, which at first doesn't sound like something I'd play, but it was just too cute to resist for long. The art style is very reminiscent of heavy metal inspired tattoos or even those old Garbage Pail Kids trading cards or something in a simple yet potentially chaotic game system. Maybe I'll be able to get folks at the office to play the game with me or something. Of course Tobie will be open to trying it, but I do want to get some of the work folks on-board as well. It's a thing.

Well I better head off to bed. I have a very early start for tomorrow that I need to worry about.
birthdays gaming tabletop gaming Tobie work