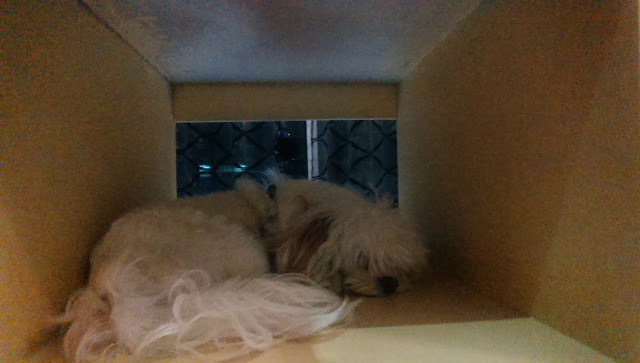 My started on a somewhat bad note since I had woken up too late and thus had more traffic to deal with on my way to work. Tobie had repeatedly tried to wake me up, but I guess my body was just not in a state to allow me to move. I wasn't late for work at least - but it certainly wasn't as early as I would have preferred. But life goes on, eh? We make the most of the cards we are dealt.

One of the problems we've been dealing with at the office feels one step closer to completion, which is definitely a good thing. I recognize that part of my feelings of fatigue have related to my feelings of stress and anxiousness, as is my way when I'm chewing on a problem. It's a nasty habit and I always catch it a little too late. I suppose it stems from a very strong desire to make things right and solve all problems that I'm face with, but of course we're only human.

Today the traffic home was especially bad given the rain and I'm eternally grateful that Tobie was able to pass for me and Yoshi on the way home. And while it's not too difficult to hail an Uber while in BGC, there's still a world of difference when you're in a car being driven by your partner as opposed to some random driver.

All that said, I still wish I could get a massage right now. Still so tired.
health inner ramblings Tobie work Yoshi