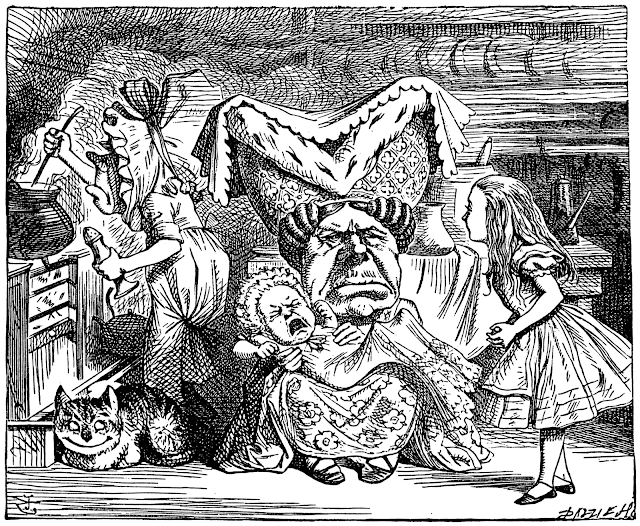 So we finally had our second session of A Red and Pleasant Land, which is set in a strange horror fantasy world very similar to Alice in Wonderland. As much as I do tend to play my character a little lighter, there's no doubt in my mind that this is a horror game. There's a lot of strange and disturbing things in play and it always amazes how well disturbing things mix in well with the works of Lewis Carroll. But hey, such is the nature of surrealism, right? It takes the innocent and familiar then you yank the rug from under it all.

In the game, Tobie and I play a husband and wife, although it's a mixed marriage between a  dwarf and a magic user. I think we've fallen into playing our characters as like a weird twisted fantasy version of Downton Abbey-style upper class people. It's rather insulting and we're tying to a lot of horrible sterotypes we're dredging up from our sometimes caricature notions of Victorian England, but I think for the most part it works. The game has things feeling pretty dire indeed and death seems just around the next corner.

We had some player changes due to real life obligations getting the way of things. But the new mix of players at the table is making for great potential stories. Groups aren't necessarily better or worse than one another since that boils down to a very apples and oranges sort of comparison. You instead focus on how well each group works together and what the player atmosphere is like. And I think the new mix today is proving to be pretty interesting, to say the least.
books gaming sietch life tabletop gaming