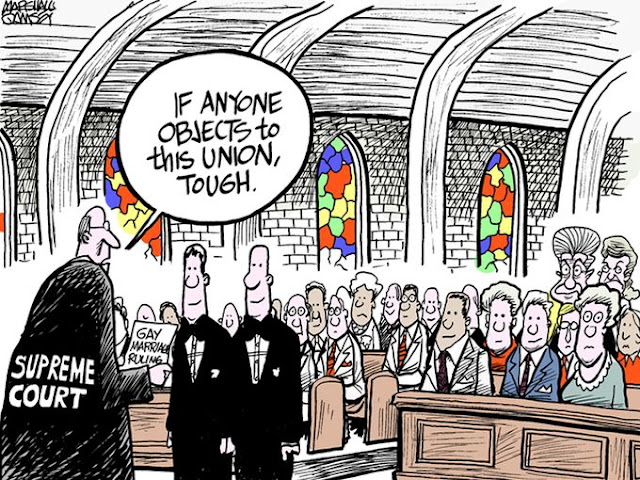 The social media conversation about the US Supreme Court ruling in favor of marriage equality continues on until today. And while my carefully curated social feeds didn't contain any particularly hateful speech against the LGBT community or gay marriage, it still contained a lot of people taking rather strong stances in defense of it. Some might argue that some folks argue a wee bit too passionately about marriage equality to the point of becoming outright hateful and insulting. And this is a disappointing turn of events.

Granted, it's not bad to feel happy about marriage equality gaining constitutional protection in the US after the ruling. But at the same time, we also have to recognize that the Philippines is not the US. This is not to say that marriage equality will never come to this country - as a gay man I continue to hold strong to the belief that it will one day happen. However the US decision was the result of years of a strong LGBT rights movement. It's the result of grassroots recruiting and education efforts, extensive political lobbying and a lot of sweat and tears. And while our own LGBT rights advocates have been fighting the same fight for years, it has been a bit of a slow battle.

We are, after all, a country where religions like Catholicism hold a lot of political sway and influence across the country. And even if people aren't quite as perfectly religious as they claim to be, it's far too easy to parrot back the same anti-LGBT rhetoric that they've been taught for so many years. It takes a while before opinions can be changed with new information, stories that hit closer to home and even discovering that a friend or family member is actually LGBT.

We often call this a fight for rights and a fight for equality, but this should not be a divisive line in the sand. This should be about love, as it has always been. We should focus on our love for our friends and family and our hope that they focus on their love for us in the LGBT community and find it in their hearts to look past the hate they've been taught for so long and see us as the equal human beings that we are.

We will not win this fight through hurtful worlds or violence. We will win this struggle through patience and understanding and most of all, love.
inner ramblings queer life stop the presses