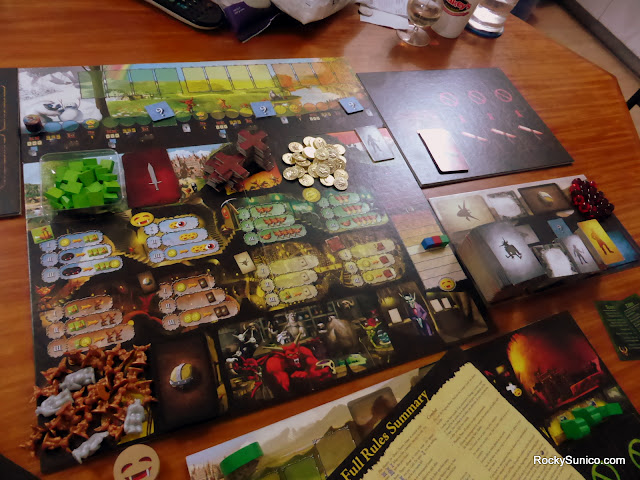 So last night's Ryuutama RPG night sort of morphed into a fun night of board games and homemade Vietnamese pho that Urim had cooked for the group. In hindsight though, we only managed to play two rounds of Smash Up and one long session of Dungeon Lords. But yeah, all that made for quite a lot of fun.

Smash Up has really gotten better with the last few expansions. The sheer diversity of the game given all the different factions that we now have. Last night I got to try the killer combination of Werewolves and Princesses, which ultimately involved a lot pretty strong minion cards coming out all at ones. Then I tried Shapeshifters and Fairies, which didn't feel like a perfectly smooth combination, but it managed to help me gain victory in the end.

Dungeon Lords remains rather frustrating to me since the game requires one to balance a good number of variables in order to see victory in the end. I'm able to score a decent amount of points over time, however I've yet to get through the game consistently without scoring penalties. And ultimately this what causes me to lose more than anything else. Still, it's the sort of brilliant worker placement game that only the Europeans are able to consistently come up with. Really good stuff.

Due to a strange coincidence of events this weekend, we don't have any more games scheduled. Thus we're just going to make the most of tonight's big Manila Luzon LGBT Pride event at O Bar and tomorrow will be more about rest and relaxation. Hope everyone has a great weekend as well!
gaming sietch life tabletop gaming