So I made a quick run to Toycon 2015 today in order to secure the convention exclusive Funko Aswang figures for Tobie and for a friend of ours. I didn't have any Transformers that I was looking for since I had done all my spending through other channels. So I didn't have much to locate there and it was more general browsing. Plus it's not as fun to look around when Tobie isn't with me.

After securing the Funko figures, I decided to check out the book for iflix after getting a complimentary button at the ticket booth. At its most basic level it's a regional version of Netflix with a rather mixed library of content but one that is supposedly still growing. And given my personal frustrations with the lack of Netflix in this country, I have to admit that I'm pretty interested in the service. 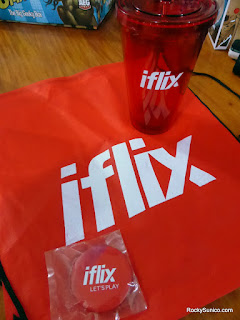 The marketing booth that iflix had setup at Toycon was fairly simple, but it was a nice amount of breathing room amid the cramped aisles of the sales floor. But the real claim to fame where the attendants at the booth, who were all pretty animated and very engaging. They were quite to show off the actual player app at a moment's notice and were fully prepared to answer questions. So yeah, the marketer in me was really happy with how they were handling things and and the little promotions they had to encourage people to engage with their brand more. And man, iflix really went all out in terms of the various freebies that they had on hand to give to people who agreed to sign up and or post on social media with their hashtag.

So I didn't wait for the formal email with my 30-day trial period and immediately signed up with their standard 14-day trial. The library isn't too bad and has some interesting gems here and there and it's worth at least a second glance. Plus if you're a PLDT Home customer, then you can get the service at a discounted rate of only PHP 99.00 per month, which is quite a steal when you think about it. As much as iflix is no Netflix, the price is suitably scaled to the size of its library at this point. And if the press release related to their tie-up with PLDT is to be believed, then streaming video for this site shouldn't count negatively towards any datacaps for PLDT and Smart customers.

I like how quickly the content loads and it has account-based sync across all 5 devices so you can pause watching on your computer and pick things up on your mobile phone quickly enough. I've yet to fully figure out how to queue entire seasons to play at once and I've yet to find a good way to play it on our TV short of directly connecting a computer to the TV. I was hoping the native browser of the PS3 would be able to handle things, but it seems that is not yet the case at this point.