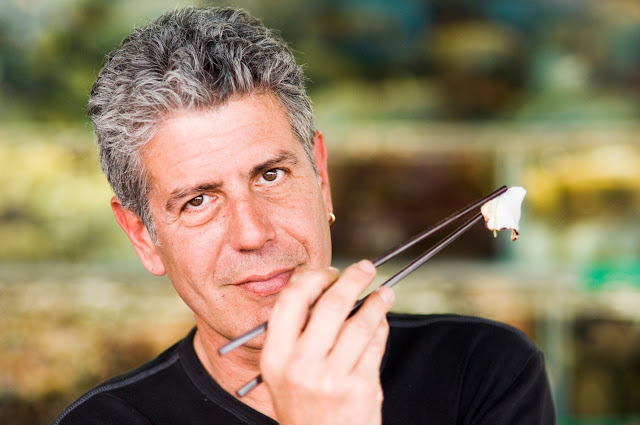 I'm not a big fun of travel - especially the sort that results in me feeling disconnected from the internet for long periods of time with living accommodations that do not take advantage of all the wonders of modern science. I know it sounds a little fussy but I'm owning up to it. And so I don't mind visiting other countries for museums and theater and that sort of stuff. I'm not keen on trips that involve surviving with whatever you can carry in a backpack or needing to squat in the woods or something. I'm rather fussy that way.

But thing I do enjoy about travel is experiencing new food and there are few individuals who are more inspiring in this particular arena than Anthony Bourdain. As much as his claim to fame was his work as a chef and the book that he wrote about the nitty gritty of the restaurant world, his TV shows seem to have focused more on his passion for good food and eating. He has quite the lengthy TV career and more often than not the production has been centered on him traveling to different places and trying different things to eat or at least celebrating dishes that a particular country or culture is known for. And that can be quite a lot of fun.

I've been thinking about his place in the food world once more since I started watching his older shows. I've already gone through most of No Reservations and The Layover after all so now I've gone back in time and I'm exploring his early works, which for now includes A Cook's Tour. It seems like a lifetime ago since he's still mostly known for his book Kitchen Confidential at the time. But there's a whole lot more to him though.

And I love how he just seems to dive into the food experiences like a true explorer. He has a general degree of confidence and trust in the cooking of others and his adventures have never shied away from showing both his good moments and his bad moments during such travels. And that really goes a long way to build credibility. Sure, TV will always be about putting your best foot forward or at least making sure that people don't see you sweat to much. In Bourdain's case, his image has always involved brutal honesty and not being afraid to say that something isn't right. And his various TV shows really go a long way towards selling that.

I think I'd enjoy the sort of food-centric travel that Anthony Bourdain gets into in most of his shows. Granted, such travels do not come cheap and I'd need some sort of a sponsor. But hey, a guy can dream - maybe the expository writing of this blog will nag me some sort of a TV deal in the future. It'll probably be a far of future, but a little wishful thinking never really hurt anyone, right?
food adventures inner ramblings run the world television