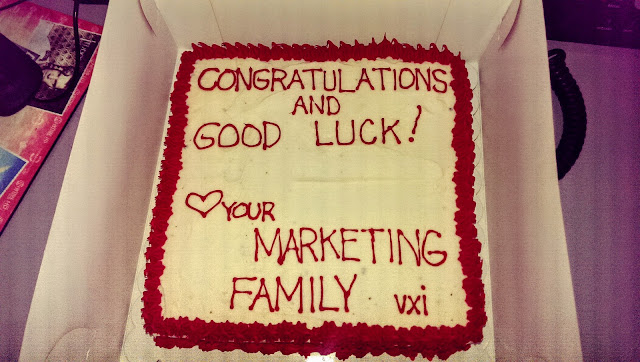 So when I arrived at the office yesterday for my final work shift, I found this cake waiting for me. It was a nice little gesture, but also a little sad since it just stressed how my last month at the office was spent on an alternate schedule mostly away from my team. I did my best to stay later for my last full day at the office however we had a guy out sick and the other had a much later schedule.

After working at VXI for nearly 12 years, it felt a little weird to only have about 70 people that I wanted to email directly about my departure. I of course had messages for the team and messages for our executives and other messages for people who've been around at VXI for a similarly long period of time. Sure my tenure is rather rare, but I still know a few folks who have been with the company for some time. I only know a particular subset of employees from the 15,000 people we employ worldwide. But man, even a hundred people feels like a drop in the bucket for 12 years.

Bringing the VXI part of my career to a close is a somber moment and quite bittersweet, but I think this is still a key decision that will lead to bigger things in the future. I need to grow as an individual and getting out of my career comfort zone should help me in terms of my professional development as well.

I've received some kind notes and some individuals genuinely interested in what I have next in store for myself. There's a lot to look forward to and I'm glad for the support of my peers and I do hope we meet again under favorable circumstances.
inner ramblings work