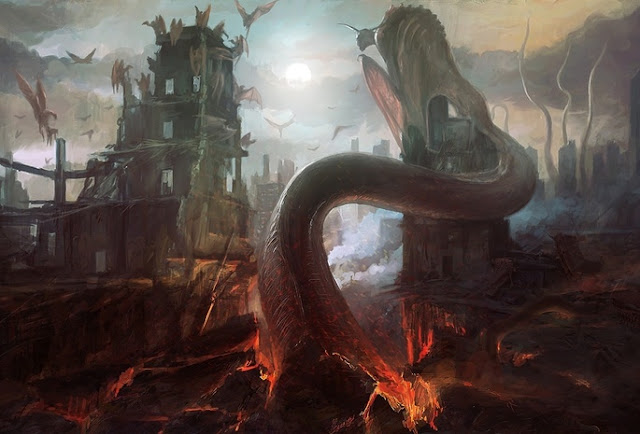 The end of an RPG chronicle can be a pretty significant event in the gaming world. The longer the campaign. the more potential "fulfillment" there is to be gained by reaching the end. It's a bit of a gamble sometimes since some games go on too long and then fizzle out with a big ending. For our Houses of the Blooded games, everything finally came to a head last night and it was a pretty good ending. I might argue in my head that the ending of the "first half" of the story may have been a bit more awesome with my dark opera used to ensnare a demon spirit creature, but this ending was pretty good too.

What was interesting was how at so many points in this game, my character was prepared to die. To be fair, this is a game of beautiful tragedy and it's all about dark consequences and betrayal, in many ways. The world of Houses is a cruel and unforgiving one at times, especially since our particular setting was more along the lines of a somewhat post-apocalyptic version of the regular setting, so things were pretty dire indeed.

Mahar's player character died to live on as a weird spirit echo of her former self. Erich and I are trapped into a magical prison I actually triggered together with the Suaven demoness and other fallen Suaven in what can now be considered to be The City at the Center of the World. This is an in-game joke of sorts since our prior characters had found themselves trapped in The City at the Center of the World, which sort of inspired the magical solution to things that my character helped bring into effect this time around. I'm not sure if we'll really live all that long given the number of injuries Erich's character had sustained and the fact that I was back to being an armless warrior who had been brainwashed into being a sorcerer of sorts.

Sadly, the game ended pretty late and we all had to rush home given Tobie had an early start to his day and I had a meeting to get to as well. So there really wasn't a chance to dive into a post-game discussion of how things went and how we all felt. We'll probably pick up the conversation online or during our next session to map out our drastically different superhero game.

For now though, I have to admit that I'm not sure what kind of a story I ended up crafting for my character. His life was indeed a tragedy and he's pretty much doomed himself to a life without his family, as eccentric and manipulative as they tended to be. He was a guy who had clung to the very edge of life and was brought back, but also changed. And when he discovered the truth of his "resurrection," instead of gratitude he felt anger and disgust since he felt he had been used as a tool for some other plan. That's what happens when your character started out as an NPC for your prior character and all of his actions were in service of the original character. That can't be too fun a life.

Of course this discussion will sound strange and needlessly dark to those who did not experience the game's story as we did. But I thought it merited discussing all the same. We've been playing this game for over a year after all - that's a significant amount of time indeed.
gaming inner ramblings tabletop gaming