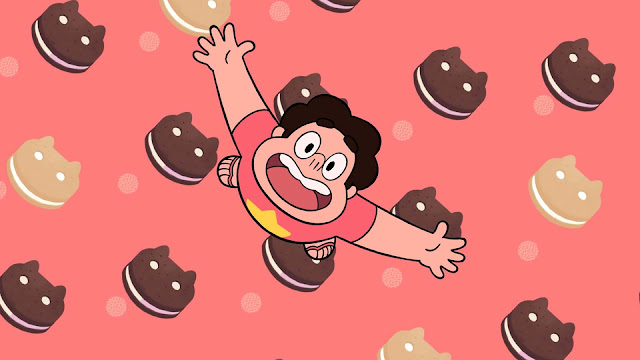 I've already written about my love for Steven Universe on this blog and over on the Geeky Guide. It's an amazing show that has done quite tremendously in its first season and a second season is already underway. Tobie and I have been strongly recommending the show to friends whenever they visit the Sietch for one of our gaming sessions. We're in full advocate mode for this show and getting anynoe else to watch is always a good thing.

Today we played the first few episodes of the show for our guests for the afternoon as a way to kill time while waiting for Tobie to finish his shower. There's a certain amount of excitement seeing how other people react to something you love like a TV show like this. And given the recent enjoyment from finding a full copy of the original Steven Universe pilot has just added to the general level of excitement. And there's always something new to glean even from re-watching these episodes. I keep saying this, but the show has really come far.

And then we played a zombie RPG with us playing characters based on ourselves. Creepy as hell.
gaming sietch life Steven Universe tabletop gaming television