02027: Philippine News Reporting Can Get Pretty Messed Up 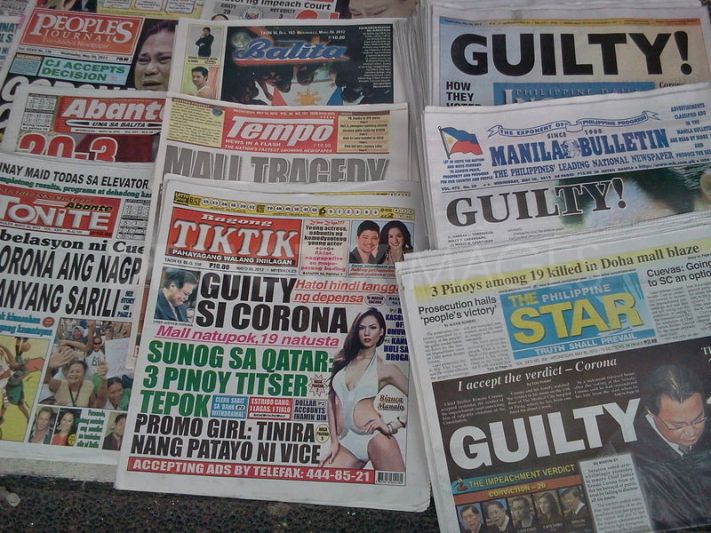 To call Philippine media biased is a gross understatement. We all know that things are bad and everyone has an angle - just look at the never ending argument of which TV station has the best ratings, as debated in their respective news arms on TV and online.

But I thought it might be interesting to look at just how bad things are and the non-stop rain of logical fallacies that are paraded in front of us as news day after day. To be fair, they're not actually lying - they're just arranging facts in such a crazy way that they try to direct readers to take a certain perspective or belief. What's worse is that they're not even clever or subtle about it.

Let's go to one of the worst offenders - The Philippine Daily Inquirer. One of today's headline stories is "Department of Agriculture squandered P14B–COA". Let's read together, shall we?

Paragraph 1 - Let's casually mention that one of those implicated in the Commission on Audit (COA) report is an ally of the President. It's a true statement, but why bring it up? Are we saying the President had something to do with this? Who knows! We'll just throw that fact out there at the very beginning of things.

Paragraph 2 - This is the actual headline story explained in detail. The paragraph before this was just fluff to give the story an angle. You should probably only read this second paragraph.

Paragraph 3 - Still factual, and it's the classic "one sentence as a paragraph" practice newspapers need to follow all the time. But it's also about a completely different news article reported yesterday (in a similar slanted fashion). So we now want to link the two stories together and demonstrate that the President's party is just full of corruption.

Paragraph 4 - Yes, the initial statement is factual, but it doesn't really have anything to do with the COA report related to the Department of Agriculture. Why do we need to be reminded he's the treasurer of the party? Are we implying he's doing something wrong with party funds on the side? And then we really go left field and mention Mar Roxas because...there's no good reason, really. The only benefit is trying to get the reader to apply the transitive property to link Roxas with this case as well since they're members of the same party. Hooray circumstantial implications!

Paragraph 5 - Now we have to link yesterday's story and today's story with the President, and bring up his original anti-corruption political platform for when he ran as president in what, 2010? We are mostly through this initial section of the article and we have not gotten into any of the particulars of the COA report. Instead we're playing Connections with all these names and are tying to link them together into some giant web of crime.

Paragraph 6 - Oh yeah, the writer remembered to write about the actual COA report. This larger paragraph is still a single sentence. This should have been the paragraph immediately after what is currently Paragraph 2 if the goal had been to be actually informative and factual.

Paragraph 7 - The writer has gotten distracted again! Better mention that the Supreme Court found PDAF and DAP as unconstitutional. Yeah, we were right on the brink of forgetting the result of that ruling so good job on reminding us about it, PDI!

Let's stop reading at this point - this has already hurt my brain.

This article, like many exposes and gotcha articles found in the Inquirer do their best to put diverse facts together in order to imply connections between the two. They would rather waste time bringing up all these side facts before discussing the actual point of the article. It's horrible, horrible writing meant to trigger an emotional response in the reader. To compare, check out this Rappler article about the same news story, which makes little to no mention of the personalities so prominent in the Inquirer article. And you know I don't like Rappler's weird pseudo-social website design, so understand it pains me to link to that article.

The Inquirer is really sloppy in how they do this and it's pretty insulting But everyone plays the game in their own way. GMA News is able to keep a bit more focused on their articles, but the articles as a whole paint a subtle pictures. Yesterday there were two stories of a similar nature that both involved exploring isolated quotes from possible presidential candidates.

In "Poe: No offer from LP yet to run for VP in 2016" we have a 500+ word article about Senator Poe not having received an offer to run for President. Why did it take 500 words to do this? Why did we have to mention her recent standing in the polls and even a comment by a Congressman related to her being a possible threat versus the political rivals of the Liberal party? Couldn't we have just reported on the main non-statement in half the words used here?

Then you have "Mar jokes about running for president during Dumaguete forum," which is practically only half as long as the Poe article . The article bounces back and forth about whether or not Mar Roxas is really going to run, and then grinds the knife in deeper by throwing in two paragraphs about Senator Poe possibly being selected as the party's Presidential candidate in contrast.

While better written than stuff on the Inquirer, this blip of GMA reporting looks pretty different once you take a step back. Or maybe I'm just reading too much into these things. Maybe this just reflects that the writers themselves have different levels of skill? Or maybe they just enjoy writing about Poe more than Roxas? It's just hard not to compare the two articles since the nature of their topics results in them having links to one another based on GMA's article suggestions.
inner ramblings stop the presses