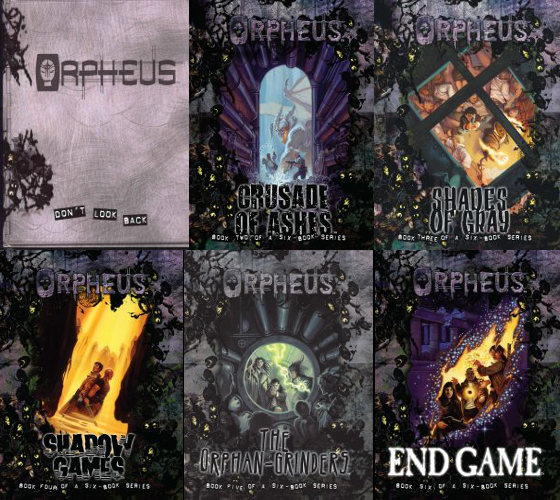 So our Black Saturday was spent playing a classic White Wolf World of Darkness game, Orpheus. The game setting assumes that there are people who can project themselves onto the spiritual plane. The game included a total of 6 books that cover the full story of the game. As of yesterday we've pretty much covered the story of the first three books, so I guess you could say that we're at the halfway mark.

I'm really enjoying this game both in terms of its system and the story provided in the game itself. It's quite the fascinating little tragedy of sorts and it support some great role-play opportunities for us as players. And while I've embraced more recent games like Houses of the Blooded given how they strongly support players embracing drama, there's still something to be said about the World of Darkness books - they could certainly tell a good story with some great moments for players.

It's still a pretty dark game and my character isn't coping with the drama all that well. I find that I like characters with that sort of complexity and it results in some interesting game sequences. As much as it can be fun to do cool stuff, seeing how these different characters evolve and grow over the game sessions. This particular gaming group once told me about the value of gaming and the potential for catharsis when you really embrace your character's situation. It has taken me a few years to do so, but I think I now truly understand what they meant at the time. And the end result is pretty glorious indeed.
gaming holidays sietch life tabletop gaming