0200B: Steven Universe Is AWESOME 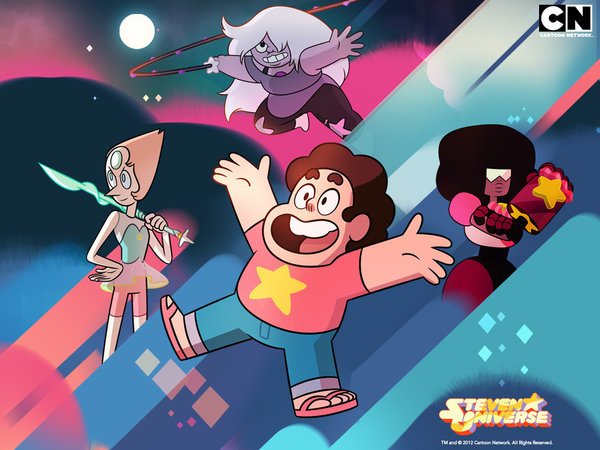 So finally got caught up with the first season of Steven Universe today and I'm still feeling a bit overwhelmed at all that plot developments crammed into the last 5 or so episodes of the season. And the second season has already begun immediately following the events of that final episode - so insane! I am going crazy at how insane it all is!

For those who came in late, Steven Universe is an animated TV series created by Rebecca Sugar, who is probably best remembered for her musical contributions to the hit cartoon Adventure Time, another Cartoon Network show that Tobie and I love. I think a good number of early Steven Universe viewers were of a similar profile - Adventure Time fans curious to see what Rebecca Sugar was up to now that she's been given her own show.

At first, it was hard to explain what the show was really about. We had the Crystal Gems, who were super-powered individuals who are later revealed to be extraterrestrial in origin. And then you have Steven, who is somehow a Crystal Gem as well since his mom was a Gem while his father is very much human. It's revealed early on that his mother's gem was passed on to Steven when he was born and now he's beginning to come into his own with regard to his powers.

The early episodes felt very random with Steven being every bit the crazy little boy getting into mischief. His powers were very sporadic and his decisions often seem chaotic and random. But following the pattern set by Adventure Time, the show has slowly revealed a more and more complex meta-plot that has been teased at time and time again across various episodes. But the end of the season, the origins of the Gems are hardly all that benevolent and there's so much more to their race than was initially known. Steven's mom was truly a key figure in the story and her role in greater scheme of things is practically epic at times. There are so many revelations that come in those final episodes and now I'm just overwhelmed with happiness and my mind racing with the many, many, many implications of the various plot points revealed here.

The Mary Sue has posted many articles about the show and they even have a pretty great Gems 101 guide for folks interesting in getting started on this cartoon. I'd love to write my own guide (and maybe I will one day) but for now it's easier read what they have to offer. The show is totally worth it and I strongly recommend it to everyone, even to those who didn't quite dig Adventure Time. The show has a more focused narrative, less questionable humor and some really strong female characters - although many of them are aliens.
Adventure Time Steven Universe television