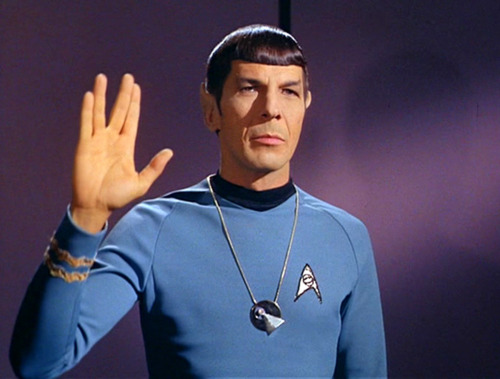 Leonard Nimoy, most popularly known for portraying the role of Star Trek's Mr. Spock, died yesterday at the age of 83. He will be sorely missed.

The Original Series episode "Devil in the Dark" was one of the first episodes I remember watching. It was such a striking one given how you had a truly alien creature in the Horta and their efforts to communicate with it rather than kill it despite how many colonists had been killed by the Horta in retaliation for disturbing her nursery of eggs. The episode remains to be a great example of what Star Trek is all about, and Spock was essential in finding a way to communicate with the planet's original inhabitant.

A lot of my love for Star Trek was formed because of what Spock represented in the show. He was the intellectual outsider, the one who observed the humans around him but also warred with the human half of his person as well. It doesn't take a genius why any other introverted boy such as myself wouldn't find something to relate to in the ever-logical Mr. Spock.

I remember actively making an effort to be more like him - to be more Vulcan. I aspired to become as logical as possible in all things and I tried to control my emotions. And I was inspired to learn more about the different fields of science. This also led me to explore different forms of science fiction, thus my eventual introduction to Frank Herbert's Dune books. Similarly I found value in the rigorous training methodology of the Bene Gesserit Sisterhood as an interesting echo of Vulcan ideals.

But it always comes back to Leonard Nimoy as Spock. His unique take on the character pretty much defined the now classic science fiction trope of the non-human who teaches us about our humanity. Pretty much every Star Trek series since then has featured a version of this archetype as seen in the likes of The Next Generation's Data or Deep Space Nine's Odo. But there is only one Spock.

I owe pretty much all of my geekery to Leonard Nimoy. He inspired many of my intellectual pursuits and even the way that I've chosen to behave in public and deal with problems. He has been a role model of sorts in many ways and I owe him quite a debt of gratitude.