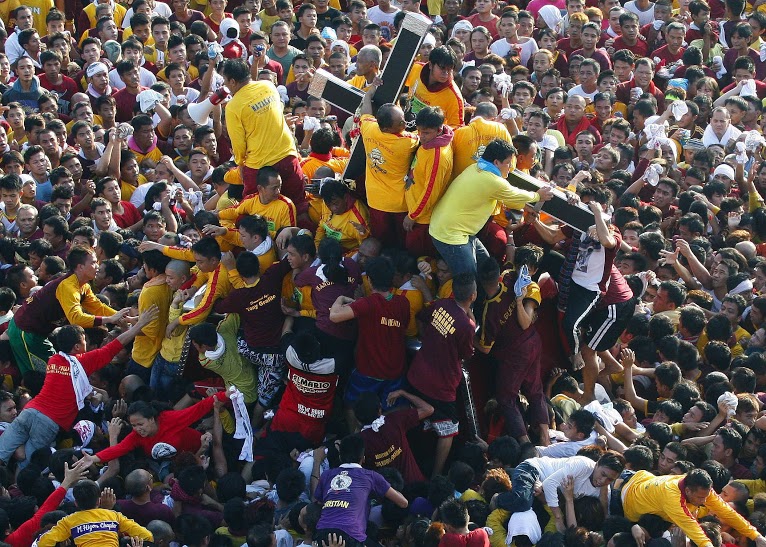 On Wednesday, the offices of French satirical magazine Charlie Hebdo were stormed by two gunmen who killed 12 people including the editor and injured another 11. The initial outrage has triggered a global conversation related freedom of speech. More recent conversations stress people's right to criticize the work of Charlie Hebdo and the risks they created because of the controversial nature of their work. There's a strong religious stance that's trying to show support for a police officer who died in the incident as an example of defending someone's right to say something that they don't agree with. It's all part of the natural shift in discussions about any issue over time.

Today the statue of the Black Nazarene is slowly making its way home as part of the annual traslacion. It's a massive event that draws thousands if not millions of devotees every year. A man has died of a heart attack already and there are quite a number of injuries as well. This tradition often gets other people confused if we've become a group of idolaters but admittedly it's a little close to call. A lot of our Catholic traditions intermingled with pre-existing pagan traditions that had been in place before the Spaniards came to the Philippines.

Carlo Celdran's appeal has been denied and it looks like he's on his way being jailed for "offending religious feelings" back in 2010 based on some obscure law that's still in the books. He has released a public plea to the Pope to teach local bishops to be more forgiving. I foresee that he's definitely going to jail since we're rather vindictive in that manner.

Next week the Pope will be in the country and the national government has declared all days of the Pope's visit to be special holidays in Metro Manila. We're closing off the airport terminal every time he's going to be there and about 37,000 policemen and soldiers are being deployed to ensure his safety. Weird news items cite the fact that the MMDA chairman released a statement about having them wear adult diapers and even advising those hoping to see the pope to do the same.

And all of this is happening practically at the same time. Such is life.
stop the presses