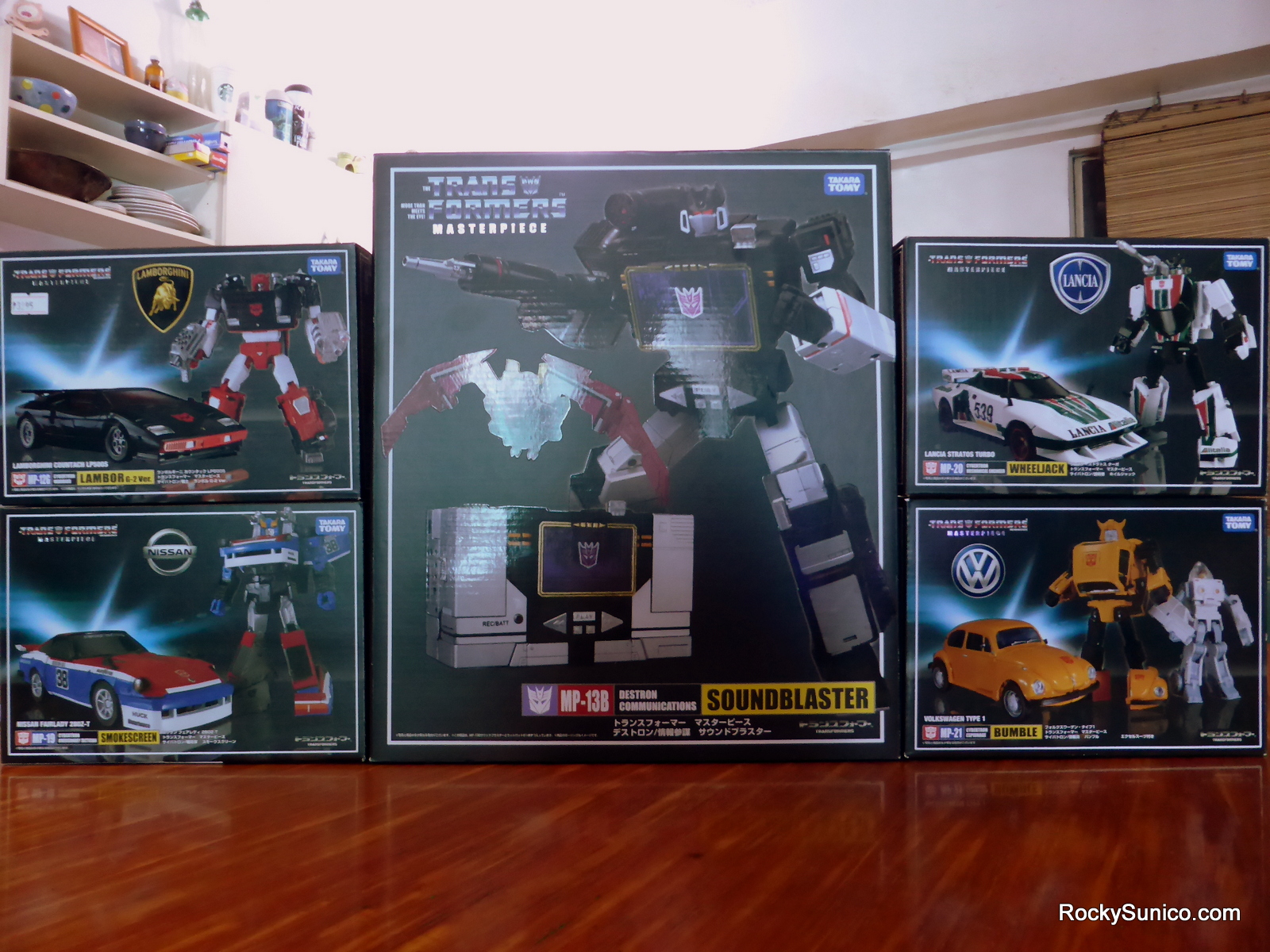 It has been an interesting year for Masterpiece Transformers figures. I didn't exactly decide to collect so many - things just sort of fell into place that way. And as I look back at the current state of my collection, things are looking pretty good indeed. It's approaching the end of the year, so humor me.

This year was big for the Autobots since Takara released a number of G1-era characters that all followed generally similar sizes that can fit in MP-10 Optimus Prime's trailer. But I've never been that much of a fan of these cars, so my initial reception was a little lukewarm. Oh life. 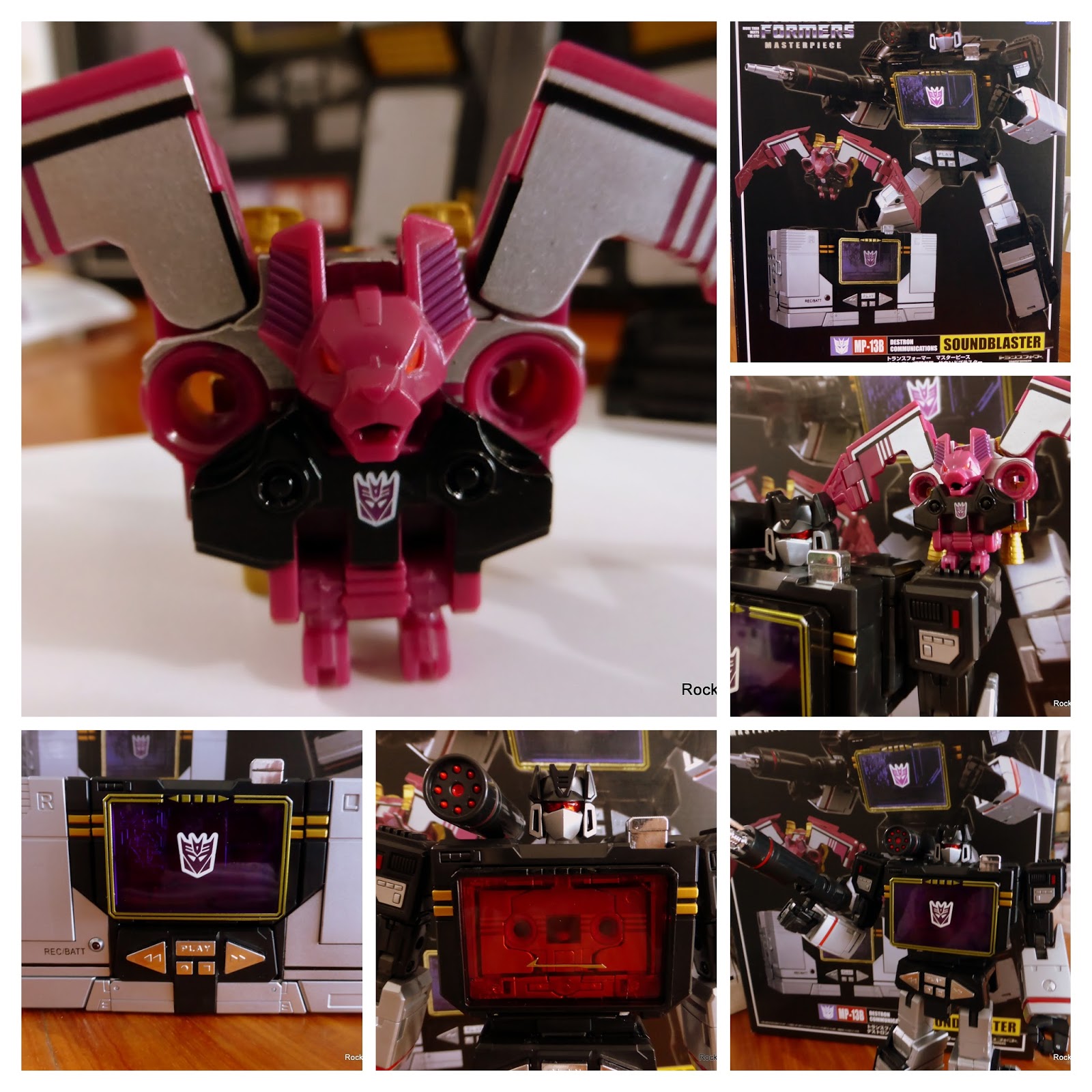 I entered 2014 only expecting to get this guy - Takara Transformers Masterpiece Soundwave MP-13B. He was definitely a welcome addition to my collection given he is a pretty badass version of the original G1 Soundwave, but admittedly there was a bigger reason than that. The key goal was to get Ratbat, since this is the only Masterpiece set that includes this mini-cassette. It was a lot of money to shell out for the little guy, but in the end it was pretty worth it. 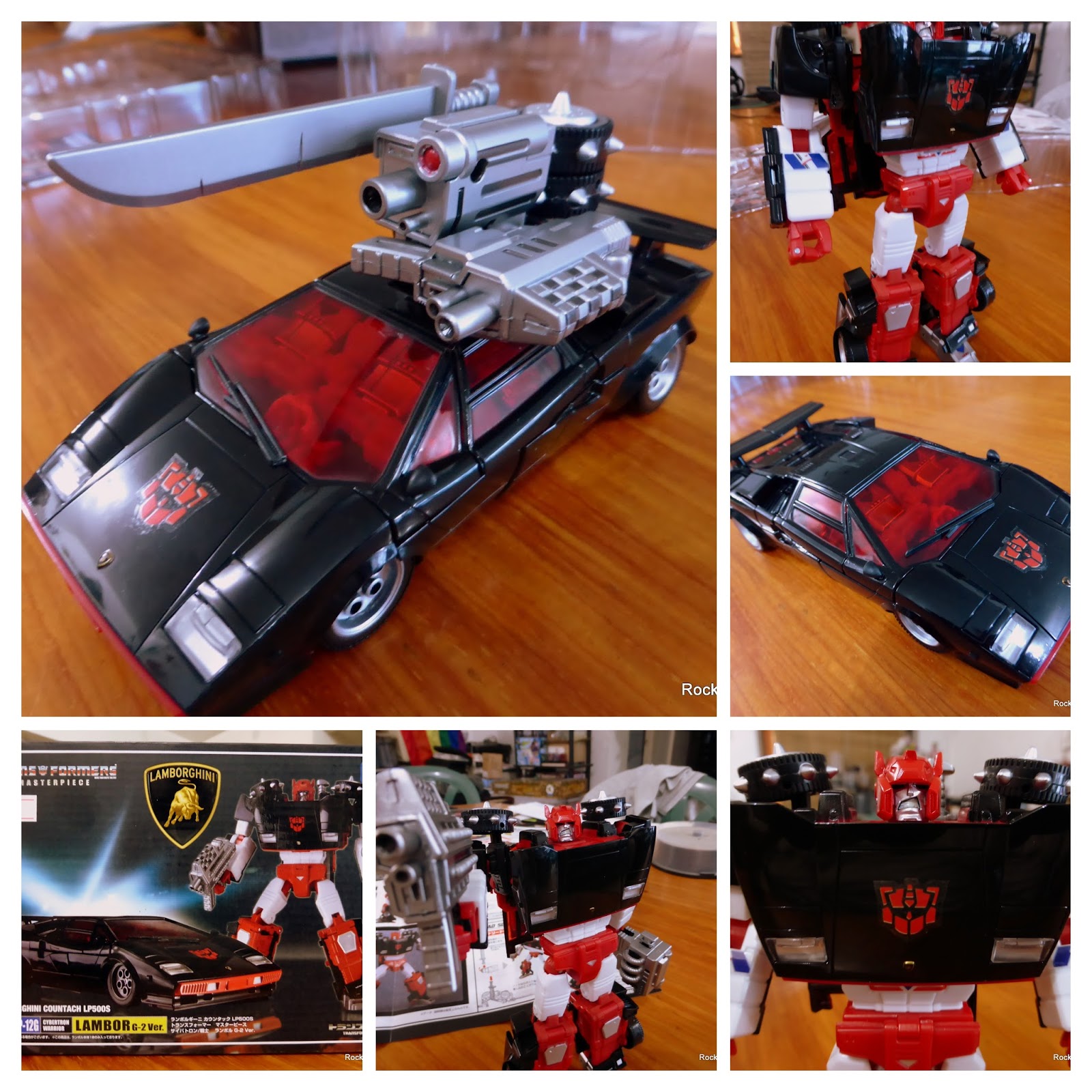 Next up was a bit of a surprise purchase - one I had primarily picked up since (1) I have my mid-year leave conversion pay on-hand and (2) this represents the Generation 2 version of the character. As over-the-top the 90's was, it's sort of fun to look back at this weird grim and gritty period in comics and laugh. The 80's had shoulder pads. The 90's had badass everything. And Takara Transformers Masterpiece Lambor G2 Ver. MP-12G pretty much captured how even the Transformers had been affected by that particular aesthetic. 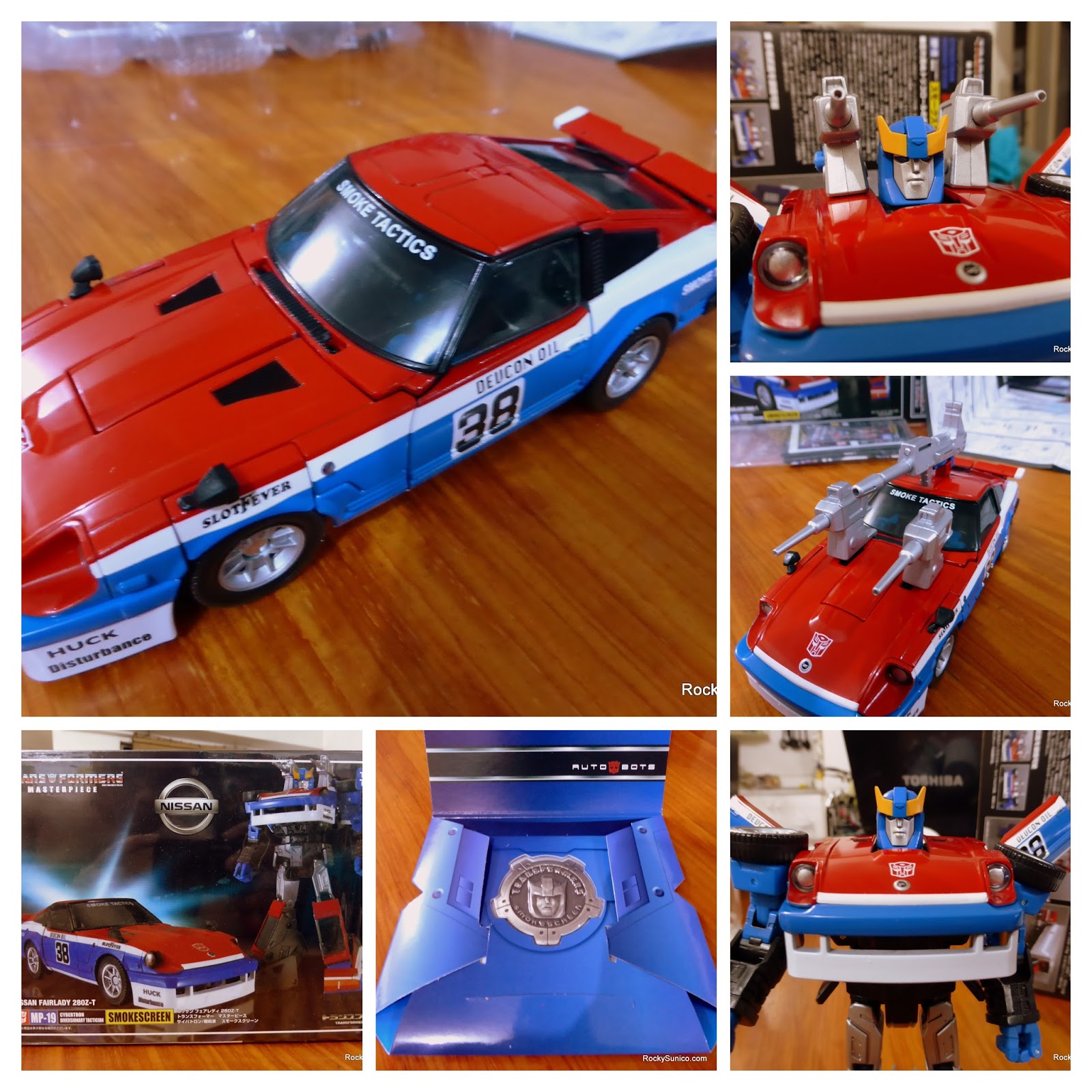 Around the same time that I picked up Sideswipe, I had also gotten a decent deal for Takara Masterpiece Smokescreen MP-19 complete with coin. As much as I didn't really think much of most of the Autobot cars back in the day, Smokescreen was nicely memorable given his quirky, well, smoke screen gimmick. The figure turned out to be pretty solid and I'm glad to have him all the same. 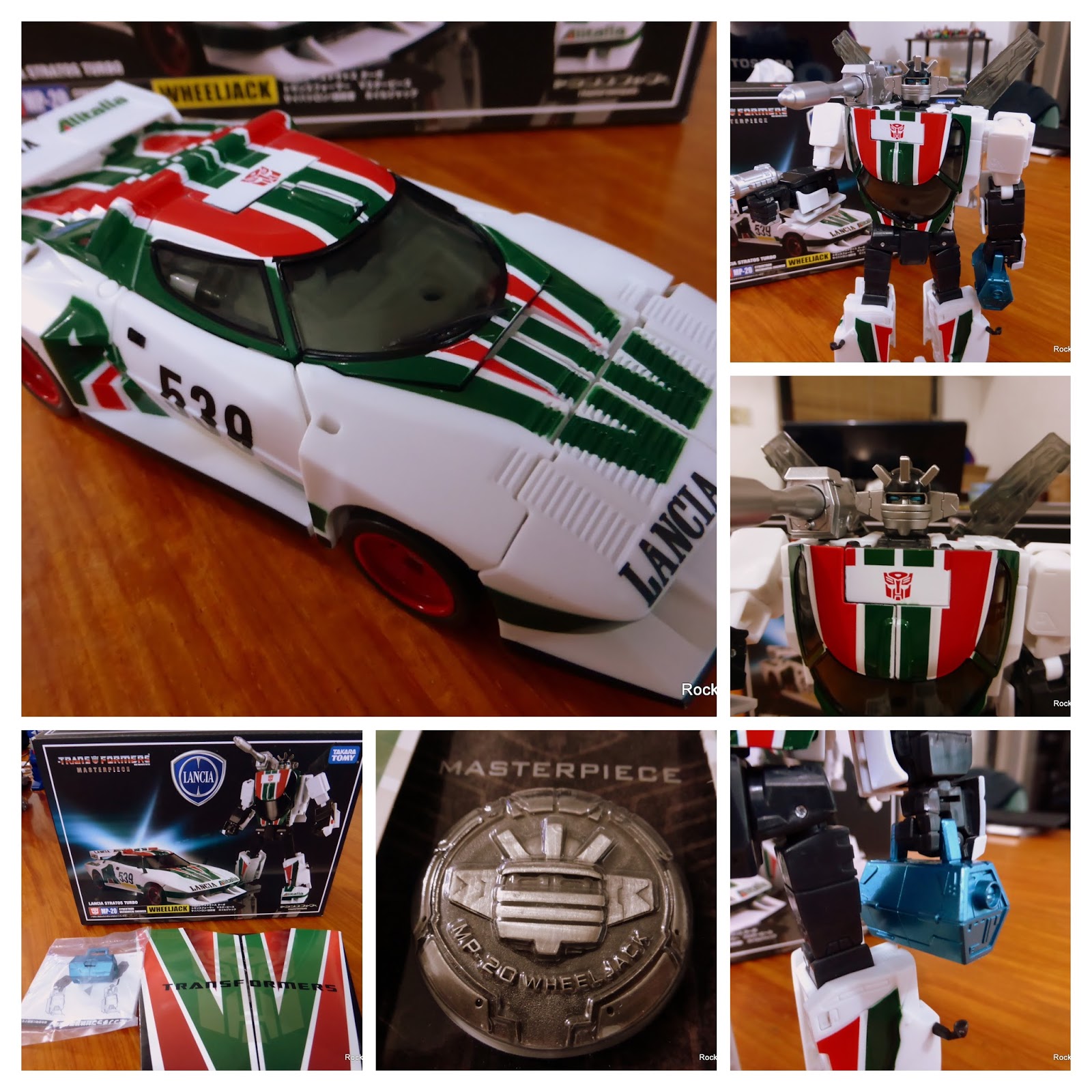 Now when I heard about this guy coming out late in the year, I knew I had to make another exception to my decision not to aggressively pursue the Autobot cars. Takara Transformers Masterpiece Wheeljack MP-20 represents a rather key character in the Transformers G1 mythos given his role in many popular stories. Apart from being one of the brainy Transformers who has to invent the episode's magical solution to everything, he also was the "creator" of the Dinobots as far as the G1 cartoon was concerned. And he makes for quite the fun figure as well. 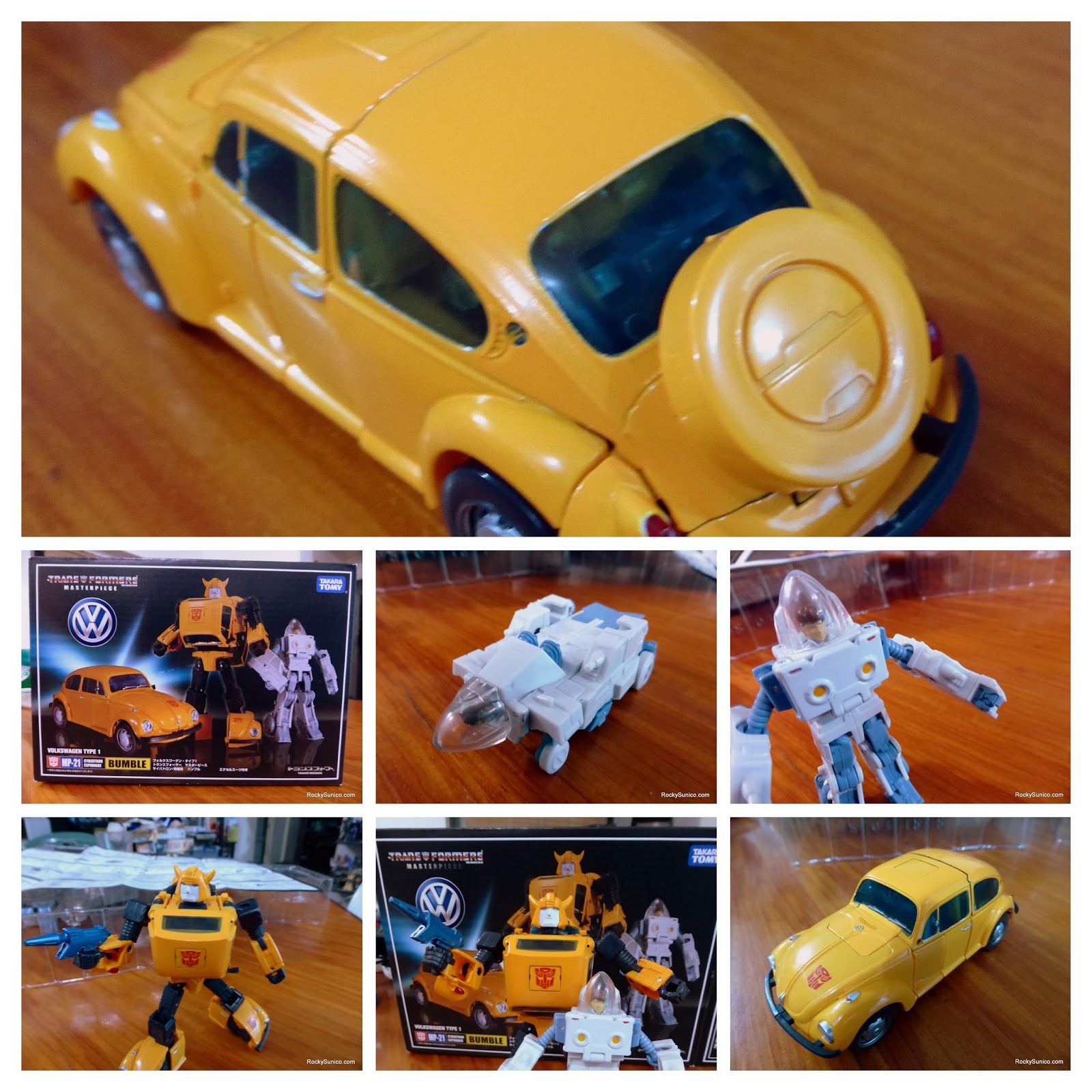 My last Masterpiece purchase of the year has been Takara Transformers Masterpiece Bumble MP-21. I've never been much of a Bumblebee fan despite how many different versions of him exist now, but it's hard to avoid gathering a few of his figures. In this case, my main goal here was to get Exo-Suit Daniel, similar to how I got Soundblaster for Ratbat. At least this figure wasn't as expensive as that deal and it's an original mold.

My wallet hopes that this will wrap up my Masterpiece purchases for the year, but there's word that the Masterpiece edition of Ultra Magnus might be out before the year ends. I didn't pre-order any of these Masterpiece figures this year and I've been mostly relying on finding them at specialty stores to really drive whether or not I'm going to get it. And given how things have unfolded for me this year, there's a very big chance that I'm going to find him sooner rather than later.

And I'm still undecided whether or not I'm going to doubleback and get the other G1 Masterpiece cars. That's a pretty significant cash outlay though since we're talking about Sideswipe, Red Alert, Prowl and Bluestreak. Then  you have crazy variants like Tigertracks or Exhaust, but I really need to think long and hard before even considering picking up these guys.

Or so I keep telling myself.