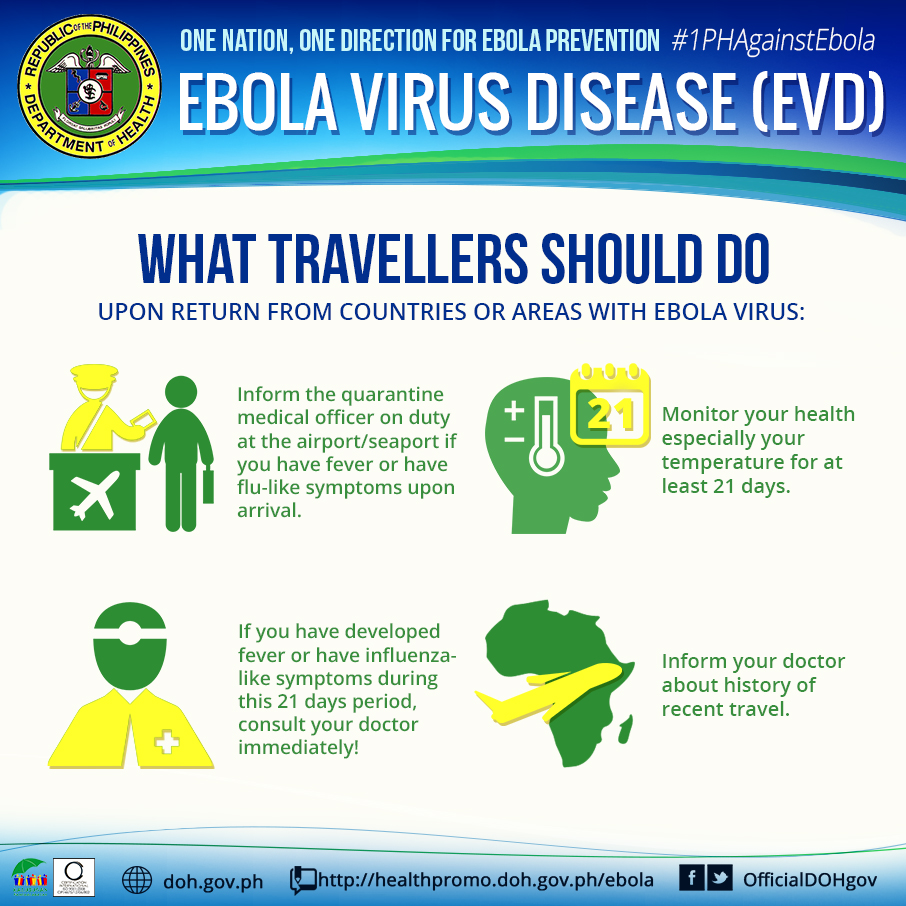 People are being really stupid, so let's talk about Ebola for today. First key link - the WHO fact sheet about the disease and the WHO FAQ. Please read at least one of them today.

Beyond the greater fears of where Ebola is actually killing people, the local issues related to Ebola began with the return of the 18th Philippine Contingent to Liberia. The area has been identified as a risk area but all members of the team tested negative for Ebola. They were allowed to go home, but someone decided to still quarantine them for 21 days. There is no logical reason for the quarantine since (1) they all tested negative and (2) no one was showing symptoms of Ebola. If anything, there's a greater risk of contracting Malaria and I think one of the members actually had to be treated for this.

The WHO guidelines related to the disease recommend that anyone coming from countries where Ebola is confirmed to be spreading to monitor their own health for 21 days. They moment they start to show symptoms like high fever, vomiting and sore throat to name a few, then and only then should they be quarantined and subjected to further testing and possible treatment. WHO does not recommend proactive quarantine methods based on the countries a person has been to - if anything it may be more effective to quarantine individuals showing symptoms at the point of departure, not arrival.

Then the acting DOH secretary decided to visit the quarantined troops to give them some assurance that the quarantine is in their best interests or something like that. And this is where the criticism is coming in since now everyone is up in arms about her somehow breaking quarantine protocol and putting the country at risk. To be fair, the notion of quarantine does assume that these individuals are isolated from all others. But at the same time, the point of a quarantine is to avoid possible vectors for infection - in the case of individuals visiting the troops, there are very limited ways to transmit the disease.

A person with Ebola only becomes infectious when he is already showing symptoms of the disease. Further more, actual transmission can only occur when there is exchange of bodily fluids which can act as a possible vector. In this case, it would mean something like the DOH representative deciding to call for a traditional blood compact with a soldier confirmed to have the disease and who is also manifesting symptoms. Clearly this is not the case here.

And so when Senators start to get worried about whether it's safe or not for the acting-secretary to appear in the Senate for budget deliberations, we're just being really, really stupid. And when you look at the comment sections of various local news sites, it seems the consensus is that they agree with the irrational fear that the acting DOH secretary is now a plague carrier. And the criticism about her not using the appropriate protective gear during the visit is equally stupid unless they're referring to the need to use protection when engaging in sexual congress with any of the soldiers. Seriously people?

This is all no surprise, of course, given the general sentiments of fear and repulsion that people with HIV face - a condition often extended to the Philippine LGBT community at large. It's too easy for people to make rash assumptions about how one might contract soethin