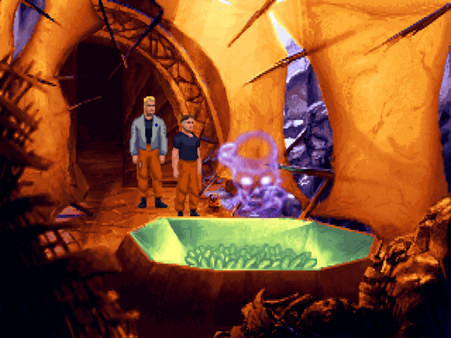 So the Mostly Walking playthrough of the LucasArts classic adventure game, The Dig, came up in my YouTube suggestions this week and I eventually gave in and watched the videos. It's not that I'm a particular fan of Mostly Walking's videos, but I did love The Dig back in the day. And so it was worth the nostalgia trip to see these guys experience the game all over again and struggle with the rather insidious puzzles baked into the game.

And while most of LucasArts' adventure games had generally maintained a light and comical atmosphere, The Dig had always been a little distinct since it took on a rather serious, somber tone tied to the overall science fiction nature of its narrative. And silly me, it was only now that I realized that even the likes of Orson Scott Card were attached to the project - this may explain a lot about the rather stoic tone of many of the characters.

But The Dig had a lot going for it given its production also involved Steven Spielberg, and his influence could certainly be seen in many of the games cut scenes and visual sequences, which were, well, rather cinematic. Combined with a rich musical score by Michael Land and you had a game with some really powerful and even beautiful moments. It helped sort of make up for the rather fiendish nature of many of the puzzles in the game, many of which relied on the premise that you were trying to interpret an alien culture with very little clues available to you.

After two long play sessions, the Mostly Walking crew paused to just talk about the game thus far and how they game came across to them. And given they had diverse backgrounds that included game design, some of their points were pretty interesting, including problems that they cited about the game. Admittedly, The Dig didn't exactly receive universal praise when it was released. And hearing them talk about the game did help me see past the veneer of perfection that nostalgia brings and see the game for what it was - pretty entertaining but often confusing and many times frustrating. Just watching them struggle through the power room puzzle and even the turtle puzzle was an interesting exercise.

But man, it still makes me want to play the game again. And there are a lot of the classic adventure games that I want to revisit despite the fact that nearly all of them contained horrible, horrible puzzles. Just think about the many, many ways one could die in the various King's Quest games, or that poison puzzle in Legend of Kyrandia and the list just goes on and on. But it's still a genre that I love dearly and look forward to experiencing and re-experiencing again and again and again.