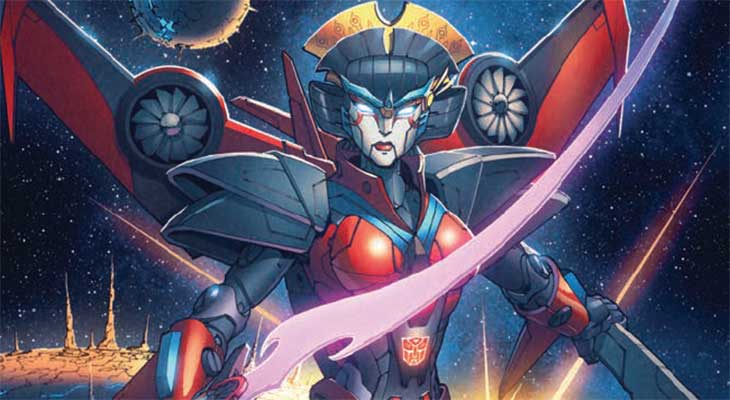 The "G1" character known as Windblade was the culmination of a lot of fan effort given she was the result of the first-ever Fan-Built Bot initiative program. In line with the grand 30th anniversary of the Transformers franchise this year, fans had been given the chance to vote on her various traits including her gender, name, alternate mode, and other personality traits. She made her first in-fandom appearance in IDW's The Transformers: More Than Meets The Eye #26, as part of the Dark Cybertron event. She's pretty cool.

So one would expect for there to be a LOT of fan interest in this character since a lot of folks were pretty invested in her very creation. Beyond being fairly cool in concept, she has turned out to be quite the interesting character and her addition to the Transformers Universe has certainly been a welcome one.

But now it seems like one needs to make sacrifices to the Elder Gods themselves in order to get a hold of her figure. News broke out that local toy stores were set to release her figure together with the rest of the Transformers Generations Wave 10 figures, but there was no scheduled "releasing" event, that has been my easiest way to secure the various figures in the line as of late. Transformers distribution is pretty crappy outside the US and it seems particularly bad here given how Playkit seems to bungle the relationship with Hasbro, thus not encouraging larger shipment sizes.

Since the weekend I've been to quite a number of stores and all of them either no longer have the figure in stock or still haven't even received the wave at all. It's pretty sad how things go in this manner and those actually interested in getting them end up needing to resort to some weird tactics just to get a hold of the toys that we want. And quite frankly I like to think of Transformers collecting as a bit of an adventure in itself - but it's only fun when there's a decent chance of getting a hold of the different toys. And in this case, it feels a lot more like Windblade has been shortpacked rather than there being overwhelming demand for the toy.

It feels like my hunt for Transformers Generations Metrolplex all over again. And the only way I secured that toy was by spending for a special convention-only version of the toy since there was no full retail release for one reason or another. Ridiculous.

And so I already have all the other figures in Wave 10 except for the highly elusive Windblade. And frankly, that just pisses me off.
inner ramblings toys Transformers