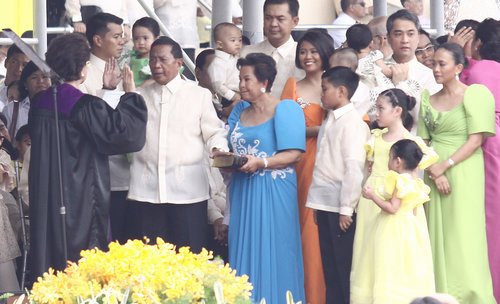 I'm calling it now - Jejomar Binay, current Vice President and former Mayor of the City of Makati, is going to be the next President of the Philippines. This is not a vote of support for him - this is merely acknowledging that should a national election be held today, he would be the clear winner. And thus it's no wonder that the Administration and its allies are desperate to bring the Binays down a notch or two with the supposed parking building scam while they try to figure out which candidate to put forward.

You can smell the desperation all over the Administration as it looks ahead to 2016. The recent controversy over PNoy's supposed openness to charter change and the public gaffes involving Mar Roxas being referred to as "President Mar" are all little efforts to test the political waters. Even Senator Miriam Defensor-Santiago smells the blood in the water and has put her own song and dance involving her lung cancer and her sudden recovery opening the doors to her possibly running or President. Sure, we all dismissed her as crazy in 1992 and I don't think she ever officially dropped her protest against Ramos being declared the winner, but she has built up enough political capital over the years to actually stand a chance.

The Administration's fault beyond devoting their entire term to kowtowing to PNoy and building him up nito something far greater than what he actually is was the fact that they never bothered to groom a true successor. We all know they hoped that Mar Roxas could fulfill this role even though he lost the Vice Presidency to Binay to begin with. PNoy was quick to give Mar a role in his administration as soon as it was legal to do so but he has continually demonstrated rather lackluster performance - nothing really to build up his image and give him a fighting chance against Binay.

Roxas was a bad idea, and PNoy's continued loyalty to the man demonstrates the same kind of cronyism-like thinking that plagued the Marcos dictatorship. And while I won't question Roxas being intelligent, politics is not about intelligence alone. And as Marcos has demonstrated, an intelligent leader is hardly a benevolent one. So that leaves us in a bit of a pickle.

The Administration's best bet is either throwing its support behind Miriam Defensor (unlikely) or behind Senator Grace Poe. Her recent stunt of riding the MRT during rush hour was a brilliant move. I respect her for trying to experience what the average Filipino commuter experiences when taking the train. I applaud her for keeping things understated and low-key, which in themselves made her effort all the more newsworthy. Say what you will and argue how genuine she is, but at the end of the day it was a masterful political move that has endeared her to more people. And her running would be wonderfully Filipino - the daughter of the beloved actor FPJ finally claiming her father's supposed legacy as leader of the country.  This stuff just writes itself.

But that's just about giving the Administration a chance - and if they really want this then they're going to have to make a decision soon and get the political wheels turning. In the meantime, Binay is cementing his political position and will probably be able to turn this whole parking building scandal around in his favor by painting himself as a victim of some sort. That man is crafty and ambitious. He has gotten this far in life through his wits and political guile. And he has remained focused on his goal of the Presidency for some time now - and his efforts are certainly paying off in spades.
inner ramblings stop the presses