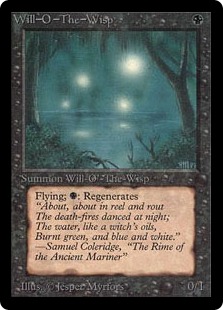 So last night's game session was my very first time to play Orpheus, the White Wolf RPG that allows you to generally play spirits or at least spiritual projections, depending on your situation. On the surface it's easy to dismiss the game as yet another White Wolf system based around a horror concept (prior ones being vampires, werewolves, mummies and Frankenstein-style monsters called Prometheans), in this case the ghost. But I wasn't quite prepared for how the system would actually turn out.

The character creation process resulted in becoming a Wisp, which is basically a person who can glow with different auras and teleport around a bit. That didn't seem like much of a power set at first (especially given other game interpretations of wisps like the Magic card on the left), but over the course of the game it was easy to see just how versatile the character type could be.

I also wasn't quite prepared for how brutal that would be as well. At first it seemed that I was well ahead of the curve with a total of 9 Willpower points to spend during the session. But at the very climax of the session I found myself pretty much tapped and right on the brink of reverting back to my sleeping body back at headquarters. I had used up so much of my spiritual vitality in performing various Horrors  that I was running on fumes.

And quite frankly, that feeling of being right at the very edge of your rope in trying to quell some angry spirit was kinda awesome and it really made for a great game experience for me. And with luck we'll be able to schedule a second session soon in order to continue to explore this interesting gaming universe.

It's already rather late and it'll be a bit of a miracle for us to get enough sleep before we have to head out again for our Sunday gaming obligations. Today we plan to be at Ludo again for some board games with friends and then it's back right into the thick of things with Houses of the Blooded.
gaming sietch life tabletop gaming