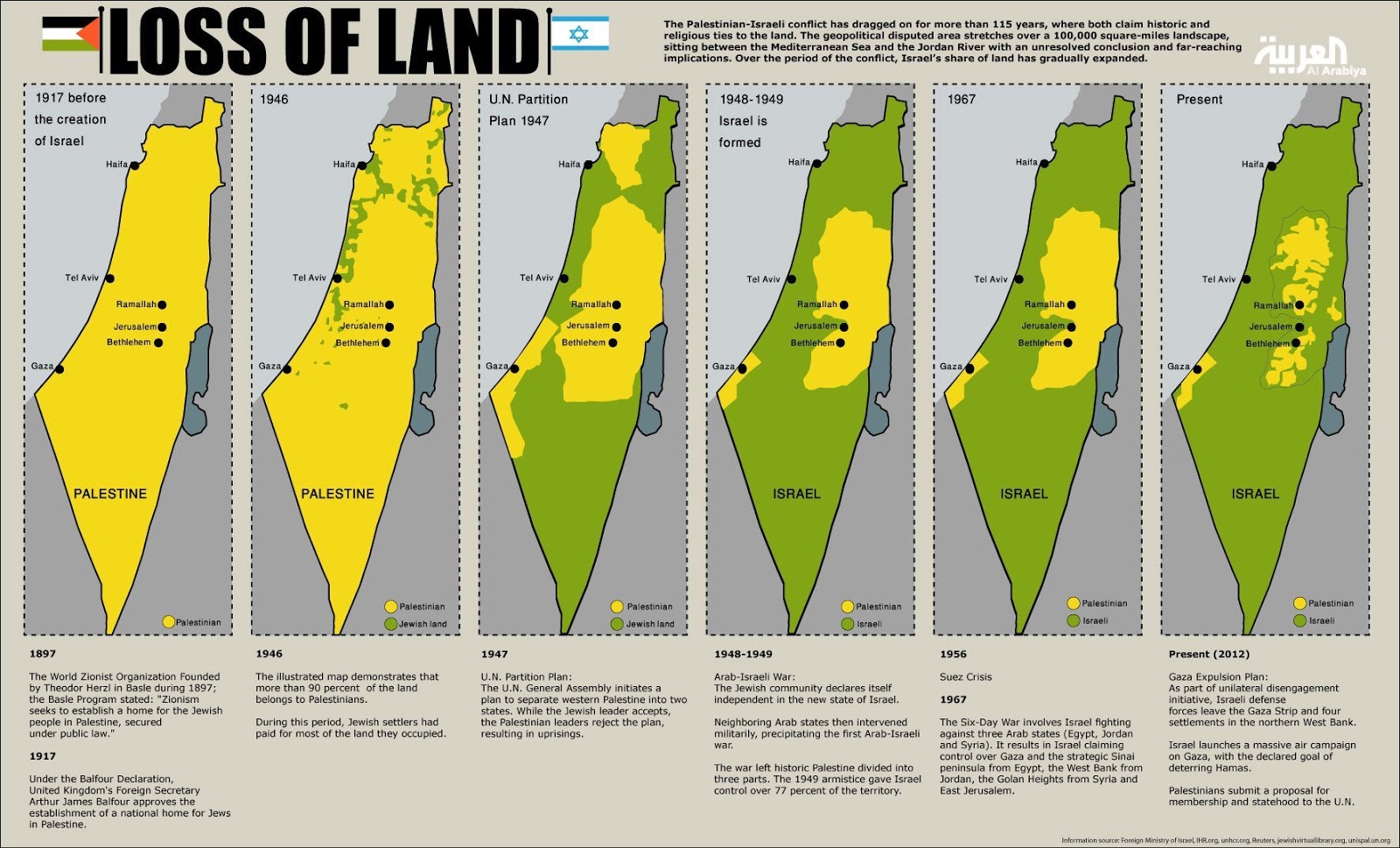 Casualties continue to rise on both sides in Israel's latest series of military incursions into the Gaza Strip. As of July 23, the death toll includes 687 Palestinians and 34 Israelis around 70% of causalities are estimated to be civilians. Israel's goals are diverse, but seem to be centered around destroying Hamas capabilities for rocket strikes and to collapse tunnels into Israel that they assert are being used by Hamas terrorists. Hamas' immediate goals are more like related to trying to drum up more support for their cause in the region but more importantly among fellow Palestinians living outside of Gaza.

It's far too easy to over-simplify the Middle Eastern conflict between Israel and the State of Palestine. But at the same time, one can't help but put some of the blame on major world powers like Britain and the United States for getting the ball rolling. Since then, the increasing complexity of things involves players like the Arab League and of course the Israelis and the Palestinians themselves. And while I don't claim to be a total expert on this subject and I'll probably get some terms wrong, I'll go over my thoughts on the subject in line with what I've researched over the years.

And while blame is hardly productive, understand what has come before can be helpful in attaining the proper mindset for even just beginning to understand the current crisis between these two political entities. You could trace matters all the way back to Britain's pro-Zionist actions in the 19th century and the infamous Balfour Declaration of 1917 that formally expressed the British government's support of creating a "national home" for the Jewish people in Palestine. And as much as there were claims that they didn't want to prejudice the non-Jewish communities in Palestine. Thus the Jews began to move into Palestine in waves (aliyahs) that spiked even further because of Jewish persecution in Eastern Europe during World War II.

In time the United Nations as spiritual successor of the League of Nations endorsed their Partition Plan for Palestine (which the Philippines voted in favor of after a strong conversation with Washington and the recall of our UN representative at the time, Carlos P. Romulo). This is where the stories begin to diverge along ideological lines. From a Western perspective (especially for countries like the United States), it was clear that Palestine and the Arab League were never going to agree to a division of territory because of declarations to drive all Jews out of Palestine using the combined armies of Egypt, Syria and then Transjordan. On the other hand, the Arab side asserts that the UN plan would have involved giving the Jewish minority population control over majority of Palestine alone with control of key agricultural lands currently occupied by Palestinians, thus slanting things significantly in Jewish favor.

And thus the many conflicts between the different countries as the Arab nations focused on driving the Israelis out (and also trying to acquire land for themselves) and the Israelis solidifying their hold on more Palestinian land. But this is not a story of woe where we should pity Israel facing all these adversaries. If anything they clearly demonstrated their own savvy by starting the highly successful Six Day War that gained them military control over the territories of the Gaza Strip, the West Bank and the Golan Heights. And thus the struggles for Palestine really boiled down to the Israelis and the Palestinians for the most part.

In the present, the State of Palestine is really more a concept than an actual nation, one that struggles to survive within the borders of the Jewish State of Israel. There are no definite borders between the two entities - something that Israel clearly takes advantage of given their periodic efforts to claim more territory and settle more Jewish communities in territories more or less marked out as Palestinian. The United States remains one of Israel's most staunch allies and Israel itself has become one of the world's largest exporters of arms - which just goes to show what their industrial capabilities are like.

Initially the story of Israel and Palestine involved Jewish refugees escaping persecution in the hopes of finding a home in the promised land. Now a large factor involves Israel being the ruling power in the region and how the Palestinians have been subjected to significant hardships because of Jewish policies that are strongly slanted in favor of its own citizens in a sort of apartheid-like situation.

Thus we have the rise of more extreme groups like Hamas that have historically used violence to get its message across to Israel that they mean business. Their original goals involved the complete destruction of Israel (which is often used as a basis for arguments in pro-Israel discussions), but we also have to acknowledge the level of desperation that Palestine has reached in recent years to just have a nation of its own. The Palestinian Declaration of Independence in 1988 that included support of UN Security Council Resolution 242 in favor of negotiating for a two-state solution.

And here we are in 2014 and we seem to be no closer to the two sides actually negotiating anything. And now the international community is calling for an investigation into the atrocities in the Gaza Strip and the possibility of human rights violations taking place there as committed by both sides. Given all that has happened over the past few decades and the way that the greater global powers had exerted their own influence in the matter, the current status quo is indeed terribly complex.

But the inherent complexity of the situation should not dissuade anyone from hoping for a solution to things. And I don't think it's unrealistic that a true two-state solution be agreed upon. But first the hostilities need to stop and whatever influence countries have in the region should be exerted towards finding peace.