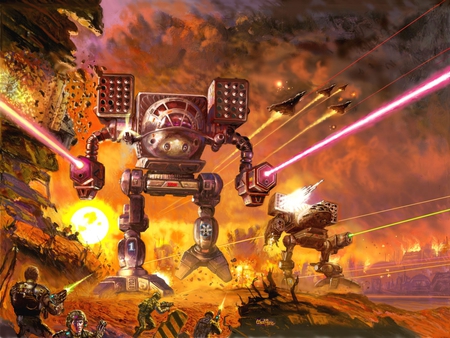 Social media has an odd habit of digging up old stories for one reason or another. And because of the mysteries of the internet, a story can go viral for one reason or another and we'll get amused by it. Case in point, I'm starting to see this story about a Mech Warrior tree house built by some NASA scientist. Not many articles mention the fact that this project dates back to August 2002, and it was fully documented on the WizKids site for a time. Most sites tagged it as a Mad Cat, which is actually its Inner Sphere designation. Given it's actually a Clan OmniMech, its Clan designation is a Timber Wolf.

I know this since once upon a time, I was majorly into the BattleTech franchise, primarily because of the many science fiction novels written about the conflict between the Successor States of the Inner Sphere and later on the Clans. It was a great story that tied together a board game, an RPG, a video game franchise, a series of novels, a collectible card game, a miniatures game, and even an animated TV show. And I only say that I "was" into it given that I'm not actively spending money on the franchise these days. If there was a way to purchase the original novels, especially those from the pre-Clan era, I'd be a pretty happy camper. For a time many of the old novels became available for Kindles, but these were later pulled for unknown reasons. In hindsight, I suspect a lot of the books were pulled since they included images of what are termed as "unseen BattleMechs" that involve mecha from various anime that had been falsely licensed to FASA in the early days. But it seems they're working on re-releasing these novels with new art, thus finally restoring access to many of these iconic stories.

My first foray into the franchise was the original MechWarrior game for PC. I was designated as my uncle's co-pilot since I was too scared to play on my own. Thus he controlled majority of the BattleMech's actions with the joystick while I provided support via the keyboard. In other words. he'd point and shoot while I monitored heat, switched weapons and tried to give commands to our AI companions. It may sound a little silly, but at the time I was enthralled by the whole experience and I had a crazy amount of fun as I cycled to energy weapons alone to save on ammo or to flush our heat sinks to keep the BattleMech operating at a decent temperature.

That led to me eventually reading the novels set in this fascinating universe. The books were more prevalent, at least relatively speaking versus today, and I eagerly collected them as best as I could. And while my set of BattleTech books probably looks a little impressive to fellow fans, I know there are some significant gaps in what I have. I'm sorely tempted to try the used books options on Amazon to eventually fill in the gaps. And believe me, it would totally be worth it. I have read all of those books more than once just because I enjoyed them so much. It's because of these novels that I first came to appreciate Michael A. Stackpole's genre fiction writing. And he was officially the first author that I ever wrote fan mail to. I wish I still had a copy of the form email he sent back in response. It had been tailored just enough to make me feel extra special.

Oddly enough, I've never invested time in trying out the BattleTech RPG. I've heard that it's a pretty crunchy system that turns all the different aspects of BattleMech combat into a variety of die rolls, probability tables and other fun nuances. When the system crunch gets that bad, you're typically better off playing the computer version of the game.

It's always nice to remember this little fictional world. I'd be lying if I claimed that BattleTech didn't influence my own early science fiction efforts. After all, this is a universe that relies on giant robots to settle their disputes. How can I not be into something like this? And I think I really want to try getting into the newer novels - at least once I've had a chance to get back up to speed with what has changed in the Inner Sphere.
books gaming inner ramblings robots rule