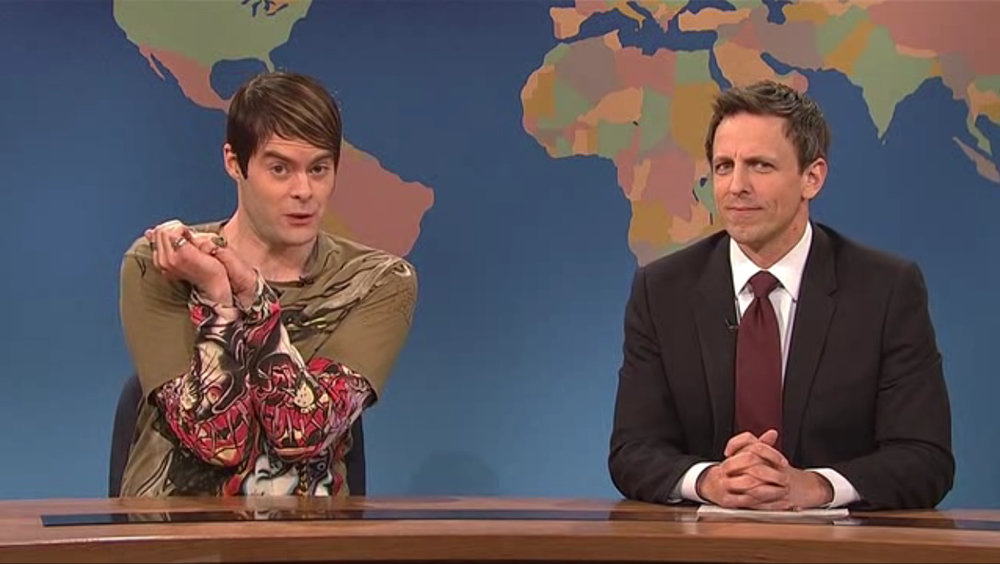 I miss Stefon - this crazy Saturday Night Live character created by Bill Hader and former SNL writer John Mulaney. His city correspondent segments on SNL's Weekend Update sketch were some of the most hilarious moments in SNL history and it's a shame that the character had to go when Hader eventually left the show. And now that Seth Meyers has his own late night talk show, I wonder how long it will take before we get a Stefon cameo? Is that too much to ask for?

Flash Fact: Tobie and I have talked about having him role-play as Stefon for Halloween sometime. We're still looking for the shirt.

So Stefon is one of those SNL characters that actually has a Wikipedia page. And I was rather surprised to find out that his first appearance wasn't actually on Weekend Update. It turns out that he had an earlier sketch with Ben Affleck called  "Movie Pitch with Stefon". And yes, he was already in his signature outfit. Most of his Weekend Update appearance are generally available on YouTube (with a few that remain region-locked, unfortunately) and I lost a good amount of time upon getting home today re-watching them. So funny.

Some might argue that Stefon is a horrible stereotype of a tweaked out gay club kid and his descriptions of various points of interest are littered with horrible racist and politically inappropriate jokes, but when taken in good faith you have to admit that they're all hilarious. And yes, I totally waited for the midget joke integrated into pretty much every single segment the most. Those were just the best.

And nothing beats his big sendoff - the almost wedding that had everything. And for those of us who followed Stefon's regular segments across Seasons 34-38 of the show, that last segment really rewarded those of you who can tell the difference between human traffic cones, human fire hydrants and of course, DJ Baby Bok Choy. Anderson Cooper's participation was just a bonus.

Beyond the horribly offensive and yet hilarious writing behind the character and of course Bill Hader's amazing talents at bringing Stefon to life, in truth what was best about his segments were those instances when he'd break character and do his best to suppress his own laughter at what had been written on the cue cards. As much as they rehearsed stuff beforehand, it seems the writers intentionally added new jokes right before the show in order to catch Hader unaware.

Now that is good SNL comedy. We're currently in one of those transition periods when the cast is still trying to find its way. But I suppose if we wait long enough, the writers and the actors will stumble across another brilliant sketch character that will make us all laugh.

But there will always and forever be only one Stefon.
inner ramblings sietch life television Tobie