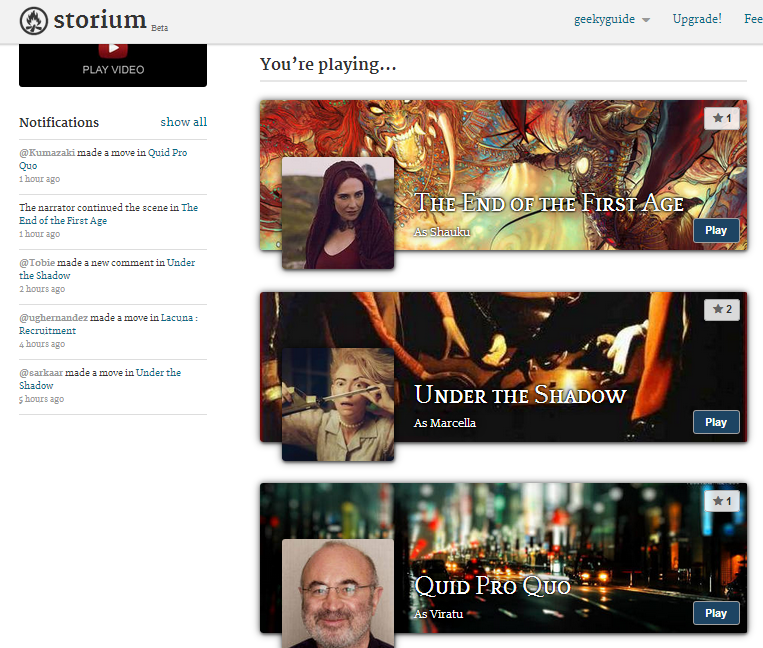 Let's take a moment to talk about Storium.

At its most basic, Storium is an online storytelling game platform of sorts that allows a group to work together on a story. Tobie got involved in the Kickstarter behind the project given his own interests in shared narratives and creative games. Plus there's the fact that Storium naturally translates well into a venue for  role-playing games that are highly narrative in nature. In other words, the games that Tobie enjoys playing.

Only paid users can create games. But free users have the liberty of joining as many games as they wish in terms of games that they have been invited to or games that are publicly listed. I am involved in 4 different games at the moment, all of them with Tobie as the narrator. It's an interesting experience that reminds me a lot of the old play-by-email or play-by-forum days of such RPGs. But at the same time juggle four different games is a fair amount of writing that one needs to keep up with. And this is in addition to my blogging and the writing that I do at work that gets the bills paid.

I have to admit that I worry if I don't get to update as often as other players expect me to. I'm lucky to log on for about 15-30 minutes a day - and not necessarily all at once. It seems like every time I log back in, so much has happened and it feels like my character is holding back everyone else's progress. Even just writing this blog post about my Storium woes is time not spent advancing the game. On the flip side, time spent on Storium means blogging time lost. Or whatever. The blade cuts surely and deeply in either direction.

But I am having a lot of fun, and thus my efforts to keep up and be a good player for all the others. My longest play-by-email campaign was an interesting Star Trek campaign where I was a Vulcan scientist on some Federation vessel. I had also played a Dune game via some ancient BBS channel, but that really didn't go quite as far as I had hoped. I do want to see these games prosper.