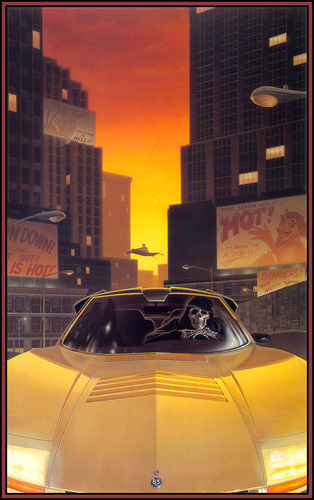 A close friend's father just died, and thus there's that general sense of death (or Death?) being particularly busy right now. And while the logical part of my brain rebels against this sort of personification of the aspect of death in real life (despite how much I enjoy it in fiction), a side of me gets a little creeped out too. As much as there's death in the world every single day, who's not to say that there isn't a bit of a plan at work, eh?

We talked about the death and several related topics, as is our way. And I verbalized a few statements of merit.

First, I'm not afraid of dying. It's bound to happen sooner or later. And given my weight and my family's rich medical history, it'll be more likely sooner than I'd like.

Second, I concede I am afraid of death - or at least the death of others. But not just anyone - the people I consider particularly close to me. Tobie's obviously at the top of my list along with key family members, but I do have some friends who have magically managed to get up there. And given how the past few years have been going, I'll admit that I'm not sure how much more death of that level I could possibly handle. As much as I can grin and bear it and find a way forward, a part of me dies every time this happens. And I don't like the fact that I can actually speak from accumulated experience.

Third, the fear also cuts the other way - I'm wary to make new friends. Or perhaps it's more accurate to say that I'm not exactly rushing to deepen any friendships further than where they stand now. And it's not because I hate humanity in general or anything like that. It's more because I'm feeling rather guarded at this point and unwilling to invest so much emotional capital in other people. And it's probably just a knee-jerk reaction to recent events, at least for now. But it's hard to say, really. I've kept to myself for the most part since Jayson died in 2009. Tobie has been my main pillar of support. And while I know I can face anything that the world can throw at me with Tobie by my side, I know it's not healthy to keep myself overly guarded.

But sometimes it's just so hard to think things will get that much better any time soon.
deaths inner ramblings