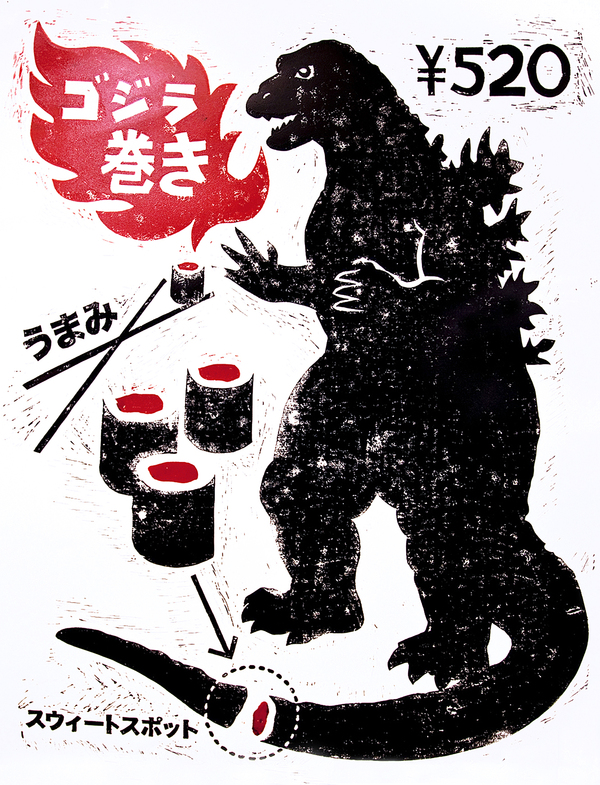 With my work week finally over, we've spent most of Saturday thus far with Urim and Che. Plans sort of went into quantum flux for a moment, but we opened the proverbial box and figured out what exactly we wanted to do. And given that we're still up and about right now, I'm rather glad that I skipped out on the Transformers: Age of Extinction toy event at SM Megamall this morning.

We decided on two major goals for today: to try out the sushi and sashimi buffet at Genji M and to catch the new Godzilla movie in the theater. We left the Sietch at around 03:00pm and managed to map out a rather creative schedule to get everything done.

The buffet was a lot of fun. The fact that we had to order our food in batches helped keep things under control while still ensuring that everything is fresh. And so we had a lot of fun trying out all the different variants that were available while also trying to get past the chef's recommendation plates that sort of buffered the meal. But on the whole, it was rather enjoyable, especially given the good company.

Godzilla was a little underwhelming. I think we all agreed that we liked the look and feel of Godzilla as a monster but we just didn't get enough of him. The decision to force a human perspective to things was rather overdone and that just took away so much time that could have been spent with massive Kaiju battling it out. Plus there were a lot of weird decisions when it came to the sound - either that or our POV was heard of hearing. Or the monsters lumbered around on little cat feet.

But the company made things a lot more fun. And that's really the point of today. Today was a day that reminded me and Tobie about the value of our friends. Live moves on.
food adventures moving pictures sietch life Tobie