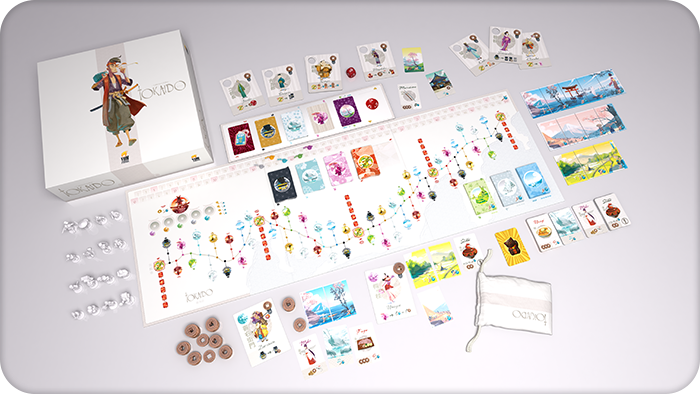 Earlier this morning I pledged to support the Kickstarter for the Collector's Edition of the board game Tokkaido. This came about since Tobie had shared the link to the project with me over chat while I was trying to get him to go to bed already. There really wasn't a question of whether or not we were going to get this game - Tobie has been pining over it ever since he discovered the details of it online but we had yet to find a local source for it. It was really just a question of how much we were going to invest in this given it is a Kickstarter project after all. Thankfully it had already reached its funding goal, so there really wasn't too much to worry about in terms of how reliable this particular project would be.

Tobie mentioned he was interested in getting one of the higher pledge tiers that would ensure that we'd gain access to all possible stretch goals to be unlocked. I was pretty interested in the same level as well - but I wanted to check on what Tobie was comfy with. Given Tobie will always hesitate to get something fairly expensive for himself, I quickly processed the pledge and told him that I had already purchased it as an advanced birthday gift while he was still debating if it would be okay just to settle for a lower tier. Given how difficult it is for us to surprise one another due to being highly drift compatible, to borrow the Pacific Rim terminology, I've learned to be a little unpredictable and just rush forward with these things.

Ever since I had signed up for what would become the Broken Age Kickstarter, I've backed almost 20 projects of all sorts including books, TV pilots, and video games. Thus far I've only completely received the rewards for 9 of these projects (including the basic "thank you" mentions) with a fair number of them still in-development. A lot of them are well past their committed delivery dates, but I still remain pretty hopeful about things. At times it's just nice to be able to contribute to their creative efforts and support them in general. I'd like to think it's sort of like spreading good karma for my own creative efforts.

The Tokkaido Kickstarter itself will close funding on March 23, but already the project has reached sufficient pledge levels to unlock at least three stretch goals and is steadily nearing the fourth. I'm totally glad that we're going for the pledge level that unlocks all stretch goals - I think it'll be totally worth it in the long run. And while the funding will be nicely ahead of time for Tobe's birthday, the final product itself won't see release until November of this year. So I guess this is now a sort of combined birthday and Christmas present?
gaming sietch life tabletop gaming Tobie