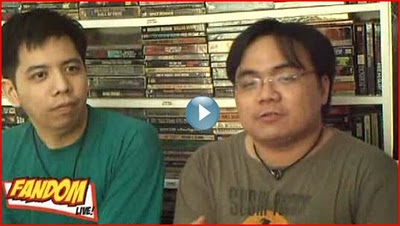 Once upon a time there was a web show of sorts known as Fandom Live! It was a recorded as live show that was put up by a number of geeks who just wanted to talk about the things that they loved. Tobie was very involved in the series and when we first starting hanging out together, it became one of the first ways that we got to know one another better. It was certainly a lot of fun even though it was ultimately a labor of love with no budget other than whatever we wanted resources we wanted to throw at the project. It went on for a few years but it eventually died out given real world obligations and a general lack of financial support. And it's such a shame since it was a lot of fun to do.

Recently one of the social media groups that we're active in, Philippine Tabletop (a group for local tabletop RPG enthusiasts) has started a series of Google Hangout sessions that have come to be known as the Hangout Mimic sessions. Again Tobie and I have started joining these online discussions and we're recently found that my clunker of an Android table (an ASUS TF101) turns out to be a pretty decent Hangouts engine for these talks.

And that has let to me thinking that it might be nice to run a vlog of sorts. Totally simple with little to no production value and just a lot of talking about geeky stuff. Given how even major YouTube outfits like Geek & Sundry have some pretty simple vlogs that consist of people talking on their couches, it seems totally possible. It could just be a personal venture or maybe a spin-off of my primary public blog, The Geeky Guide to Nearly Everything. Tobie and I could put up that longtime plan for a Baduy Pride web show as well - the possibilities are limitless.

So what do you guys think? Would you support a weekly vlog from me and Tobie? What would you like us to talk about?